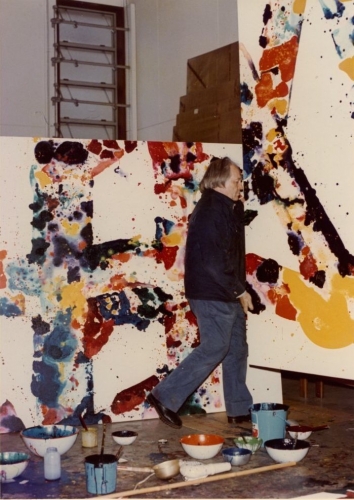 Sam Francis was born on June 25, 1923 in San Mateo, California. Francis served in the United States Air Force during World War II, leaving in 1944 due to an accident that left him with spinal tuberculosis. It was while Francis was recovering from his injuries that he took up painting as a hobby. In 1947, Francis committed himself to art full-time, studying under Bay Area artist David Park at the University of California, Berkeley, where he received both his BA in 1949 and his MA in 1950.

Despite his reticence to formally associate himself with any movement, Francis is linked to the second generation of Abstract Expressionism, and he was inspired early on by Clyfford Still and Jackson Pollock. Knowledge of their work compelled him to focus primarily on light and color in his paintings. These interests were furthered upon Francis’s move to Paris in 1950, where he met fellow abstract painter Jean Paul Riopelle and attended the Atelier Fernand Léger, encountering the work of Pierre Bonnard and Henri Matisse. During this time, Francis developed his personal style of dripping, cell-like forms punctuated by bright color and vast swaths of white space. Between 1960 and 1963, Francis began to hone in specifically on the color blue in his “Blue Balls” series, inspired by his own personal, physical pain.

In 1962, Francis returned to California, and shortly thereafter he was included in Clement Greenberg’s landmark exhibition “Post Painterly Abstraction” at the Los Angeles County Museum of Art in 1964. His work over the remaining decades was inspired by his encounters with Zen Buddhism, Jungian analysis, and various world travels. In the 1970s, Francis experimented with applying color with a roller and utilizing a formal grid structure. By the 1980s, Francis had manifested an interest in printmaking, founding the Litho Shop. Francis was active in many publishing and nonprofit enterprises, including the formation of an alternative energy company in 1975; the opening of the Museum of Contemporary Art, Los Angeles in 1980; and the founding of the The Lapis Press in 1984.

“Painting is about the beauty of space and the power of containment.” 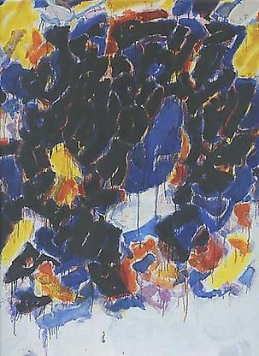