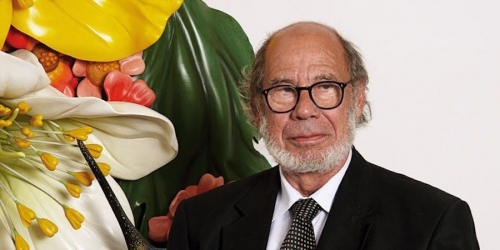 Equal parts connoisseur and razor-sharp businessman, Robert Mnuchin rose to the highest ranks of the financial industry before becoming one of the world’s top dealers in modern and contemporary art. Until 1990 he was a partner and the head of equity trading at Goldman Sachs and, during part of that time, served as a director of the American Stock Exchange and the chairman of the Upstairs Trading Com­mittee of the New York Stock Exchange. After more than 30 years, Mnuchin left Wall Street to partner with the dealer James Corcoran in C&M Arts on Manhattan’s Upper East Side. The space was renamed L&M Arts in 2005, when the private dealer Dominique Levy replaced Corcoran, who had left long before. There, Mnuchin has sold blue-chip postwar artworks and organized museum-quality exhibitions—“Jackson Pollock: Drip Paintings on Paper 1948–1949,” “Picasso: The Classical Period” and “Yves Klein: A Career Survey,” to name just a few—that marry loans from institutions and private collections with choice pieces for sale. Next year, he and Levy will open an outpost in Los Angeles concentrating on contemporary artists. In the following conversation, Mnuchin draws parallels between equities trading and art dealing, frequently putting the interview on hold to take calls while offering this gracious apology: “It’s a habit from my Wall Street days—I had a phone with 120 lines. My boss would stand behind me and say, ‘Damn it, pick up the blinking lights!’ ”

You’re a major player at the auctions. At some sales I’ve attended, you’ve bought upwards of four items.

Were you there at my favorite night, when I waved my white scarf?

Oh yes, I remember that well. You waved it in surrender upon dropping out of the bidding war for Joseph Cornell’s Medici Princess box at $2.3 million. [The work sold for $2.6 million.] An amusing moment!

I try to make it fun. As so many of the prices have become so high, it has understandably gotten more serious. But it’s still great. I love going to auctions. All the people in the room love it too—otherwise they would just call in their bids.

There’s also the competition for an object. As a trader, you once quipped, “The worst trades are generally when people freeze and start to pray and hope, rather than take some action.” Is that observation relevant to the art market, as well?

Yes, it applies anytime you are buying and selling anything or making decisions of any kind, in business or in life. You might have a high batting average, but you are going to make mistakes. And it certainly is useful, with the investor part of one’s brain, to recognize a mistake—don’t try to defend it, but say, “Let’s get out,” and move on to something else.

So what is L&M’s approach? Tell me a bit about pricing.

For us to pre­­sent something, we have to like and respect it. It isn’t just an object for us to sell and make 10 or 15 percent off of. The second part is, we have to respect the price. Sometimes you’ll see auction houses offer very low estimates or very high estimates. I’m a great fan of auction houses, but they don’t feel a sense of responsibility for the price. We do. We try to set fair and appropriate prices based on the artist and the quality of the work in question and on the current marketplace. We’re proud of that. I don’t know how much we give up in keeping our standards enormously high, as opposed to being driven by the opportunity to make money.

Aren’t auction houses’ estimates a way of creating a psychological expectation for what an object is worth?

Well, there are two ways of looking at that. One is that a low estimate could attract greater interest, and the hope is that once people start bidding, they will keep bidding, whereas a high estimate can scare people off. Or a high estimate can create a frame of value. There’s a case to be made on both sides. But I think most things are well served by lower estimates.

There has been a lot of talk for several years now about a market bubble, particularly in contemporary art. What do you think? And why hasn’t the credit crisis had any impact?

I ask myself those kinds of questions all the time, and I get asked them a lot because of my background. But I don’t profess to have the answers. Not only has there been an enormous broadening of interest in art, but there are also so many more museums, and there are going to be even more museums. The fact that art will have a different position worldwide in the foreseeable future is irreversible. We don’t know if we’re in the beginning or the middle of this rising market. We might make a good case that we’re at the beginning.

What do you tell people who want to invest in art?

I believe, as a collector and as a dealer, that the reason to buy art is because you love, love, love it. The next question is, Can you afford it? Then you must try to evaluate it, but it has to start out with “My life is going to improve by having this kind of presence in it.”

Of course. But that doesn’t mean there aren’t people who want to use art to diversify their portfolios, so to speak.

There’s no question that for some people, it is about diversification of assets. I like that notion a lot better than the idea of speculation. The percentage of speculation in the market is lower than one would expect, especially when you get into the very items that startle us with their prices: trophies! It’s hard for me to imagine that any of the core group of 10 or 15 trophies that have sold in the past two or three years have anything to do with speculation.

You think somebody bought a $50 million or $60 million Bacon for speculation? Does that sound logical to you? With younger art, it is different. What’s the fun of going to see an off-Broadway show? There’s a sense of discovery. It hasn’t been reviewed four times. For some, hunting young art—in Chelsea or London or wherever—offers the lure that maybe this is the next Warhol.

What about art funds? Asher Edelman cites one that you founded as a rare example that worked. Can you tell me about it?

When I started the business, I created a small limited-partners fund with a structure not too unlike that of a conventional hedge fund. I tried to raise a very limited amount of money. I didn’t want the responsibility of a lot of money, and I didn’t want too many investors. I went to fewer than 10 people whom I knew well. They invested with me because they had respect for me. It still exists in its original form. They haven’t hit any home runs, but they’ve done nicely with it.

What about the bigger funds?

I honestly don’t have an opinion on them. We have to go through a cycle and see what happens. The only one I’m aware of a little bit is the British Rail Pension Fund.

I don’t remember what the definition of that success was. Clearly it bought quality objects.

And it invested for the long term.

It was very well advised. The objects it bought had nothing to do with fashion.

I just read that Charles Saatchi is now advising a hedge fund on purchases of new art.

Without being negative about it, these things are totally out of sync with what interests me. What interests me is representing or having objects that we think are wonderful, having the pleasure of working with people, or often their advisers, to consider an artwork, understand it, explore it, try it out and decide that they want the experience of owning this thing. That is where my satisfaction comes from. You know, I’m an idealist in all aspects of my life, but I certainly am as an art dealer. I think of myself as a collector who’s dealing.

Considering your recent work with contemporary names, such as the Amer­­ican artist Liza Lou and the British duo Jake and Dinos Chapman, would you hesitate to do business with a client you knew had a tendency to flip pieces at auction?

I believe the people who buy a work of art are entitled to do whatever they want with it. On the other hand, I would hope that if they chose to do something with it, they would come back to us.

But you wouldn’t insist on a resale agreement?

No. I would rather look them in the eye and say, “Listen, you’ve changed your mind. We’d certainly appreciate an opportunity to work with
the piece.”

After your partnership  with James Corcoran ended—amicably, because he wanted to move back to California—why didn’t you change the gallery’s name to Mnuchin?

Many people told me to do that. They said, “People know you, they admire you. And it would be good for you.” But we already had a logo. And maybe I don’t like trading on my own name.

"The Wise Men: Robert Mnuchin" originally appeared in the August 2008 issue of Art+Auction. For a complete list of articles from this issue available on ARTINFO, see Art+Auction's August 2008 Table of Contents.