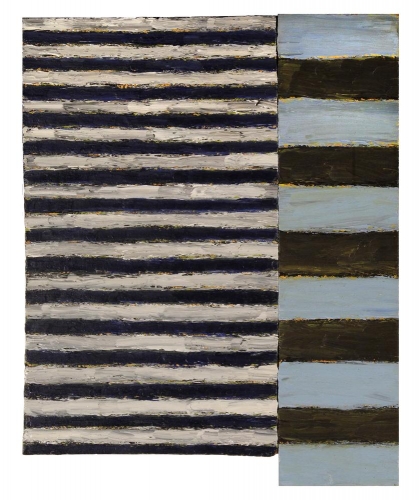 More than 25 years since they were made, the paintings in “Sean Scully: The Eighties,” now at Mnuchin, have lost none of their potency. In fact, for this viewer, they have only increased in resonance. The early ‘80s represented a transitional moment in Scully’s career, and by the end of the decade a mode of painting emerged that was assertively and recognizably the artist’s own. Moving to New York City in 1975, Scully worked in a stringent, hard-edged minimalist style. This changed definitively following a stay at the Edward Albee Residency on Montauk in 1982. Included in this exhibition are several works made on found wood during that residency. This resourcefulness proved to be of great significance for Scully’s development as a painter.

Bear (1982) is comprised of two vertically joined panels. The left panel is horizontally striped with alternate dirty white and black bands; the right panel is narrower, and while both panels are level at the top edge, the right half extends below at the bottom edge and is striped with broader blue-gray and black bands. The two sides appear to splice together contrasting realities, like montage in cinema. They picture an idea of simultaneous proximity and distance — a central concept in Scully’s painting from the 1980s. More can be said of duality in Bear as the two sides of the painting move at different visual speeds, the right panel tranquil in comparison to the agitated movement of the left panel. Oil paint is applied in an aggressive, rhythmic way, adding to the sense of musical interval and percussive measure. In paintings such as Bear, elements are already present that through variation and change of emphasis proved adequate to Scully’s ambition — any changes made are intuitive and responsive to paintings already made, rather than for the sake of change or embellishment. Shelter Island (1982) again contrasts bands of black and grayed white on two panels — this time on linen, one stretcher deeper and so more forward than the other — on one side the bands are vertical, and on the other horizontal. Typically, the painting is frontal, its surface actively worked in oil paint, wet into wet. This remains so for all other paintings in this exhibition, and it’s just as much in evidence in Scully’s paintings seen at Cheim & Read as recently as early 2015.

The off-white and black bands recur — take, for example, A Green Place (1987). In this instance, single bands of black and off-white occupy a rectangular segment inserted at the top right of the composition. Together they form a horizon line between what could be seen as a dark sky above and pale sea below. Horizontal bands of red comprise another rectangular section inserted on the left side, contiguous with the painting’s left edge. Together, these rectangles, like paintings within a painting, operate alternately as windows or figures within the surface. The vertical orange and green bands that otherwise fill the composition provide the wall or ground against which these shapes function. While remaining abstract, associations are not expunged. The painting recalls elements of a Henri Matisse painting and the indebtedness shared by both artists to fabric patterns (in Scully’s case, stripes) seen on visits to Morocco.

Two more paintings are entirely composed of off-white and black bands. Both somber and sensuous, they are possessed of an acute intensity. Triptych Aran (1986) is the more reductive of the two, whereas Empty Heart (1987) — consisting of three superimposed blocks of vertical and horizontal black and white stripes — is exposed and stark. A more chromatic atmospheric light is produced in other paintings, though there is always a gravitas that leans composition toward invention rather than playfulness. For instance, A Bedroom in Venice (1988) is muted with soft blue light that brings to mind the humid air and radiant light of that city and its effect on color sensation. Longing, melancholy and urgency all prevail in these paintings. This denies a place for complacency and evinces a drive and focus that both address art-historical connections, and the contemporary world vis-à-vis the particularity of Scully’s own experience, be it emotional or visual.