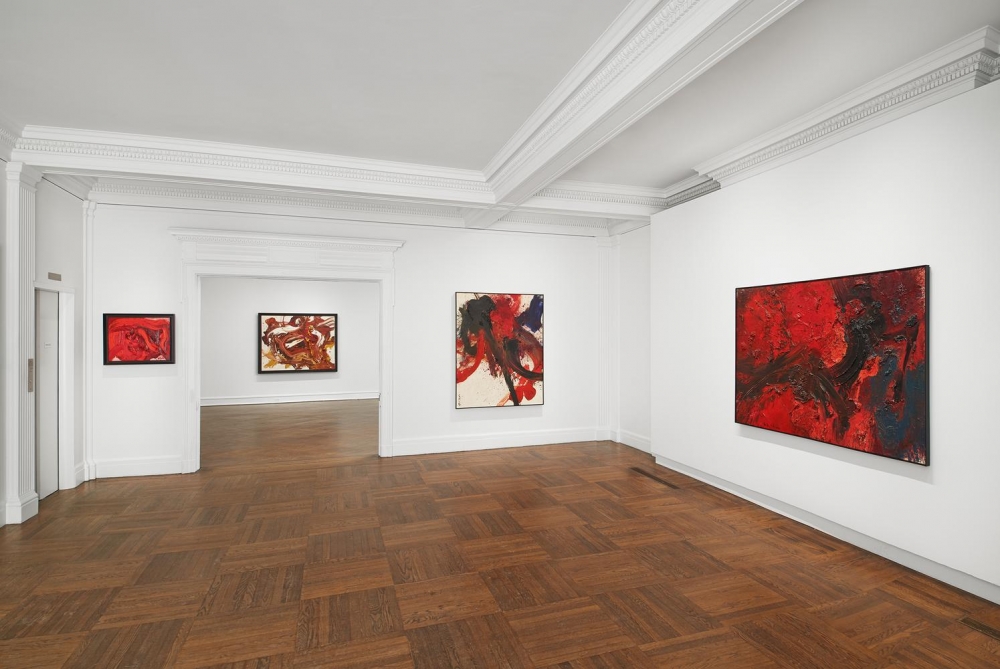 THE GUTAI GROUP may be the cicadas of postwar art—forever cycling through visibility and obscurity, suddenly bursting into view every ten years or so. Buoyed by the attentions of critic and curator Michel Tapié, the group formed in Ashiya, Japan, in 1954, and made their New York debut at the Martha Jackson Gallery just four years later, only to be summarily dismissed as latecomers to the Abstract Expressionist party. Nearly a decade later, they resurfaced in New York again, in “New Japanese Painting and Sculpture” at the Museum of Modern Art, but that too proved a short-lived spotlight, one whose wattage owed more to Cold War–inflected interest in pre-Olympics Japan than to the works actually shown. In the mid-1980s and in the second half of the ’90s, a spate of group exhibitions in Europe and Japan proved promising, among them the Gutai retrospective at the Galerie Nationale du Jeu de Paume in Paris in 1999.

Now, however, Gutai might finally be here to stay. Exemplified by “Splendid Playground,” the group’s mammoth retrospective at the Solomon R. Guggenheim Museum in New York in 2013, a harmonic convergence of academic, museum, and market interest in the United States has resulted in an unprecedented level of attention, one likely to have a more lasting effect than any of Gutai’s previous moments in the fickle art-world sun. The group’s current appeal might be explained by any number of reasons, including its decisive turn to canvas paintings in the late ’50s; the congruence of its members’ works with so many movements, from Dada to Cobra; or its manifold efforts at self-promotion. Certainly Gutai’s activities make it easier to flesh out what the otherwise maddeningly vague idea of a global art history might entail.

But rather than dwell on the ways in which Gutai works fit into, or diverge from, preexisting histories of modern art via comparisons to Abstract Expressionism or Happenings, the most pressing questions now are those undermining consensus opinion about the group. Recent shows have begun to move toward new answers. Among these are a clutch of smaller exhibitions in New York—a solo show of Kazuo Shiraga at Mnuchin Gallery that closed in April, and two other shows that paired Shiraga: The first, on view at Dominique Lévy Gallery this winter, featured ceramicist Satoru Hoshino; the second, currently on view at Fergus McCaffrey, shows the criminally underrated works of Shiraga’s wife and main interlocutor, Fujiko. But the most ambitious exhibition is “Between Action and the Unknown: The Art of Kazuo Shiraga and Sadamasa Motonaga” at the Dallas Museum of Art, highlighting works sourced from one of the world’s premier collections of Gutai, the Hyo-go Prefectural Museum of Art. Curated by Gabriel Ritter and Koichi Kawasaki, it focuses on two Gutai members who ran afoul of Jiro-Yoshihara, the group’s leader—once described by cofounder Shimamoto Shozo as a “born misanthrope.” Cracks in the facade of the group’s presumed coherence have appeared, which allows further inquiry into the interpersonal dynamics of the group and their impact on its legacy.

Yet the persistent spotlight on individual artists has also fostered a nascent star system, with Shiraga given top billing. And it is as a painter that he is being most vigorously celebrated, though his oeuvre includes drawings, sculptures, and performances. His works from the early ’60s are particularly intense: The brashness with which he treated paint appears to have come less from spontaneity than from a deliberate effort to outdo the posturings of the contemporary French painting movement Informel. Instead of Georges Mathieu wearing a white yukata and brandishing his brush on the rooftop of an Osaka department store in 1957, there is Shiraga skidding and sliding across a board, his feet unencumbered but his hands tightly gripping a rope for balance. At Mnuchin, Chibisei Waikyakuko, 1959, showed the trace of a foot dragged through a splash of orange, the painterly equivalent of “Kilroy was here.” But Shiraga was too reflexive to immerse himself fully in the role of a macho Svengali. The footprint is neatly balanced by the demure signature in the bottom right-hand corner, while the edges of the painting are curiously untouched, as if registering willed restraint.

Among Shiraga’s paintings, the most successful are the monochromes. Those executed in 1954, prior to the artist’s participation in his first Gutai exhibition, impart his remarkable ability to purge iconographic references from even a color as suggestive as crimson lake, the hue that for Shiraga was a lodestar. In the Dallas exhibition, which covers the full careers of Shiraga and Motonaga before and after their involvement with Gutai, a 1986 white monochrome prompts us to ask whether so-called action painting still qualifies as such when the traces of that action are barely visible.

The contextualization of Shiraga within notions of movement and gesture was very much evident in the Mnuchin and Lévy shows. At Lévy, Shiraga’s En, 1997, was a melting morass of blue, red, and white, the paint resembling remnants of a crime—in this case, a direct assault on compositional order intended to bring forth a new law invalidating the division between inert object and live performance. Indeed, one wonders how much sense the paintings make outside the context of works such as Challenging Mud, 1955. There Shiraga grappled with a potent combination of mud and concrete at Gutai’s first official exhibition as a group, creating a work that could function as both a painting and a performance, video documentation of which was shown both at Lévy and in Dallas. In defiance of Sartre, who declared that the human hand “thinks only in squeezing, in kneading” yet becomes “nervous in defeat” when confronted by slime, Shiraga literally plunges into the goo, succumbing to the mud or paint. At Lévy, Kokuroo from 1964 collapses the street with the sewer via flecks of fecal brown bespattering crests of black and gray paint. Shiraga takes the decomposition trope further in Wild Boar Hunting II, 1963, shown in Dallas, in which two boars’ hides are flattened onto a canvas and smeared with pigment. Death prevails in all its messiness, a point Shiraga emphatically makes by adding spent bullet casings to the canvas.

So does vulgarity. Shiraga himself used the word in connection to his art, and with pride. Perhaps rightly so, for despite the earnestness so diligently ascribed to what he and his Gutai colleagues did, the buzz of camp always hovered around their works at a low but insistent hum. Shiraga named his paintings after characters from Shi Nai’an’s fourteenth-century epic Water Margin, celebrated as much for its racy language as for its tales of derring-do. Gratuitous may best describe Shiraga’s color choices, while his gestures are unabashedly bombastic. The ample spacing between works at Mnuchin made a particularly good point: Sometimes the ideal perspective for viewing Shiraga’s paintings is from the side or from an oblique angle. Raised lumps and flourishes of concentrated pigment rupture the delicately constructed suggestion of illusory space within the canvas by reintroducing the external space of the material and physical world. In a high-ceilinged institutional setting, some of these details get lost, with the largest works looking rather like banners for a sporting event. But in the prim domestic surroundings of the Mnuchin show, the vulgarity of Shiraga’s work was let loose. The alacrity with which critics have historically compared such works to established examples of gestural abstraction might be reconsidered as a defense mechanism, a tactic aimed at putting the work in its place before it unsettles ours. There is nothing comfortable about this art, which may in fact be what Yoshihara really meant when he urged his protégés to “do what has never been done before.” Do what puts everyone out. Chronic unease is the only condition worth having, particularly in post-1945, pre-1964 Japan, when representation was so inherently subject to perpetual interrogation.

Inadvertently helped by its frenetic pacing, the Dallas show yields another set of terms by which to reconsider what Shiraga and Motonaga actually did. The show is at its most convincing when the Motonaga-Shiraga relationship is framed through their divergent attitudes toward speed. Work, 1963, by Motonaga, featuring successive layers of pooled paint, deftly counters the apparent briskness with which Shiraga’s feet moved across the canvas. Look longer, and you start thinking about processes of deforming, a word Motonaga once used to describe his intentions for an early work. But deformation also recalls more explicitly Tapié’s attempt to enlist Gutai in his campaign to expand Informel into a global phenomenon, even though the finished object was never as central to Gutai as he might have thought or hoped.

The inclusion in Dallas of Shiraga’s Red Logs, 1955/85, and Motonaga’s Work (Water), 1955/2006, usefully emphasizes notions of load and strain, illustrating the pressure to which both artists subjected their materials. Yet they also threw themselves on the mercy of their chosen materials. Think, for instance, of the paint becoming so slippery as to escape Shiraga’s feet, or of the similar evasiveness of the oil and synthetic resin Motonaga used. The plasticity of painting is underscored. The subject of the work becomes the point at which painting starts to yield to pressure—where it shifts, melts, and eventually becomes something other than the sum of pigment plus flat support. Motonaga’s streaming paintings were the initial result of having applied too much paint, an effect he exploited by tilting the canvas.

Motonaga and, to a lesser extent, Shiraga each raise the specter of nihonga, which in the late nineteenth and early twentieth centuries was vigorously championed as a model for modern Japanese art. An invention composed of techniques drawn from both Western and Japanese modes of depiction, nihonga was a key reference for many Gutai artists even if only as a point of refusal. Motonaga was less teleological, preferring to regard nihonga as a source of ideas; his own paintings borrow from tarashikomi, a technique enabling the blending of colors by successively applying layers of paint before the first has dried.

Focused exhibitions of these kinds should go far in encouraging viewers to think about Gutai as a group paradoxically brought together by the discrepancies between its members. Yet both the Lévy and Dallas shows illustrate the risky business of putting individual members in visual dialogue with other works. Like black holes, Shiraga’s paintings, in particular, tend to overwhelm and absorb works placed at some remove. But this risk is worth taking if Gutai artists are to be seen as generative points from which to retrace a broader history of abstraction, rather than as metaphors or symptoms of its presence.

Artforum
Back To Top