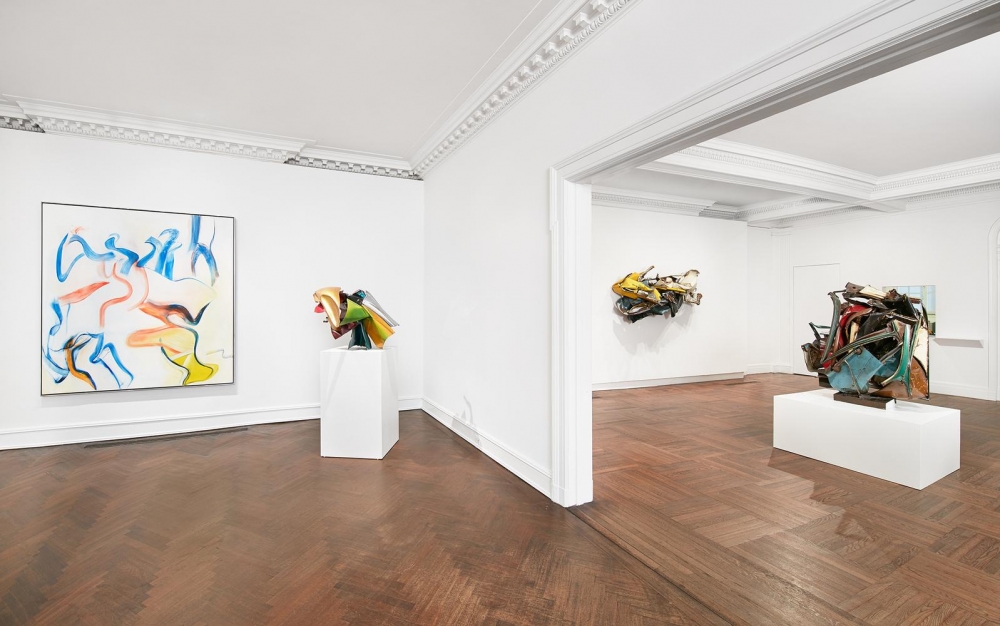 Mnuchin Gallery in New York is hosting an exhibition “Chamberlain/de Kooning” that will be on view through January 28, 2017.

“Chamberlain/de Kooning” is an exhibition of sculptures by John Chamberlain and paintings by Willem de Kooning, focussing specifically on the visual dialogue between Chamberlain’s career and the late paintings by de Kooning made during the 1970s and 1980s. Chamberlain was deeply influenced by the Abstract Expressionist painters, particularly de Kooning, which reflected in his sculptures that translates the energy, gesture, and action-based processes of Abstract Expressionism into three-dimensional forms. The exhibition brings together his twelve sculptures along with seven paintings by de Kooning. The sculptures represent two distinct episodes of Chamberlain’s career. Works spanning from 1958 to 1964 illustrate the period where the artist starts the use of his signature medium of welded steel, while the later group of works hails from the mid-1970s, marking Chamberlain’s return to his use of automobile parts. The paintings by de Kooning also represent two iconic bodies of his late work, including four major examples of abstract landscape paintings from the 1970s, in which the artist’s vibrating strokes of bright blues and flesh pinks evoke the sea, sand, and coastal light of East Hampton, and a group of paintings from the 1980s where he transforms his richly impasto canvases of the previous decade into luminous compositions in which ribbons of color ripple and curve across pale, ethereal backdrops. Presented together, the crevices contained in Chamberlain's crumpled sheets of painted enamel evoke the layered folds of color in de Kooning's canvases of the 1970s, while the gleaming, rounded curves of the sculptor's bent fenders echo the smoothly arcing lines of the painter's works from 1980s.