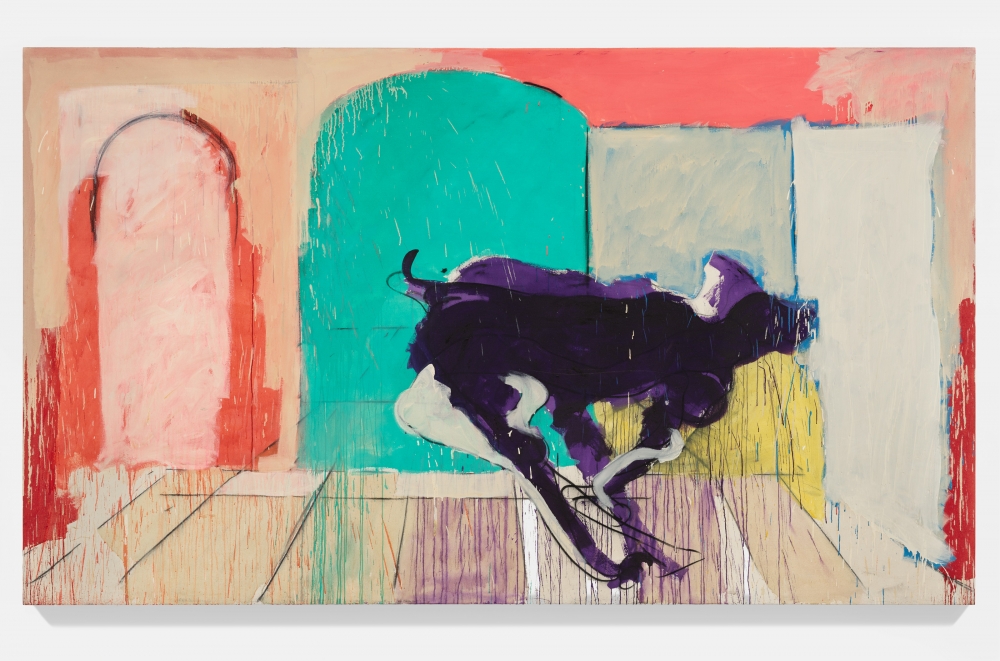 Mnuchin gallery partner Sukanya Rajaratnam first encountered O’Neal’s work at the Baltimore Museum of Art, which acquired one of her paintings this past spring and has made a public effort to add work by overlooked artists to its holdings. “When I attended their recent unveiling of their permanent collection, brilliantly rehung with the deliberate and thoughtful inclusion of African American artists, I saw the painting but also met the artist for the first time,” Rajaratnam said.

She quickly planned a visit to the artist’s studio in Oakland. “I was unprepared for what I saw: decades of work spanning her early Minimal works to the expressionist work that followed,” the dealer said. “I was floored by their scale—a lot of them seven-by-12 feet or larger—grit and ambition.”

The show, titled “Mary Lovelace O’Neal: Chasing Down The Image,” will be O’Neal’s first solo show in New York since one at the city’s French Embassy in 1993. Mnuchin will feature works from the late 1960s through the 2000s.

The show comes at a time when the market remains hungry for overlooked talent, particularly by women and African American artists. Mnuchin recently held a celebrated exhibition of the work of abstract painter Alma Thomas not long before one of her paintings set a major new record at auction, selling for $2.7 million last month. But Rajaratnam maintains that there are many artists from the ’60s and ’70s who remain underexposed. O’Neal, for her part, was a woman, black, and working on the West Coast—three major biases for the mainstream art world.

O’Neal is known for monumental paintings that she layers with unexpected materials “to explore both deeply personal narratives and mythologies as well as broader themes of racism and social justice,” according to a gallery statement. She was born in Jackson, Mississippi in 1942 and grew up between Mississippi and Arkansas. As an undergraduate at Howard University, from which she earned a BFA in 1964, O’Neal became an active participant in the Civil Rights movement, joining in marches, protests, and voting drives across the country.

While earning her MFA at Columbia University in 1969, she developed what came to be known as her “Lampblack” series, in which she applied layers of loose, powdered black pigment to large, unstretched canvases with a chalkboard eraser or her hands, and then punctured the surfaces with spare lines.

After graduation, she moved to California and established a studio in Oakland. She became a professor at the University of California at Berkeley in 1979 and was the first African American person awarded tenure in Berkeley’s Department of Art Practice in 1985. She later became chair of that department and has been professor emerita since 2006. O’Neal continued to make art during her decades of teaching.

O’Neal’s work is in the permanent collections of the San Francisco Museum of Modern Art, the Brooklyn Museum, the Smithsonian Institution, and the Baltimore Museum of Art. The Artnet Price Database has a single auction result for the artist: Running Freed More Slaves Than Lincoln Ever Did (1995), which sold for $40,000 at the Swann auction house in April of this year.

Why is this broader attention only happening now? “Perhaps being on the West Coast, a tenured professor, and eventual chair of the department of art at UC Berkeley had insulated her from the larger art world,” Rajaratnam said. “She is singular among her peers but still left out of the Soul of a Nation dialogue,” she added, a reference to the wildly popular traveling exhibition of work by African American artists from the ’60s. “It is an oversight that needs to be corrected.”

“Mary Lovelace O’Neal: Chasing Down The Image” will run at Mnuchin Gallery from February 6 through March 7, 2020.

Artnet News
Back To Top