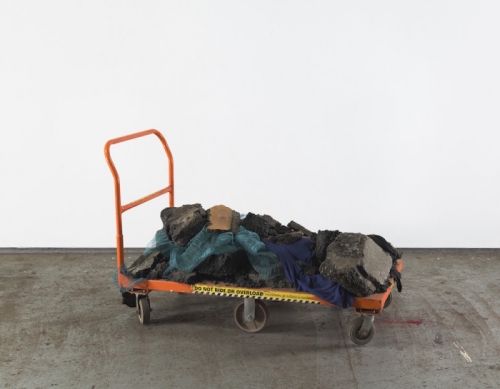 By The Editors of ARTnews

With David Hammons’s 50-year career being surveyed at New York’s Mnuchin Gallery, many critics have taken the opportunity to reflect on the artist’s work, which has often dealt with racial and economic inequities, both in the art world and in America as a whole. Below are excerpts from articles in the ARTnews archives, starting with Hammons’s early body prints from the late 1960s and ’70s, moving through an unauthorized retrospective at Triple Candie in 2006 and on to Hammons’s plans to set up a Yonkers space in the future. —Alex Greenberger

“Creating her own world”
By Gordon J. Hazlitt
November 1974

A one-man show of the work of David Hammons opened at the not-well-enough-known Fine Arts Gallery at California State University, Los Angeles. Collectors seeking preview glimpses of the art of California’s future should not fail to be on director Josine Ianco-Starrels’ mailing list. Ianco-Starrels has the keenest and most affectionate eyes for searching out new and promising talent. Parking, the curse of our town, is the main problem in reaching this gallery within the educational factory of Cal State LA. Seek it out. David Hammons shows a series of highly intense and colorful prints combined with stencil and collage. He forms images by applying oil to his body, then imprinting the paper and applying dry color to the oiled paper.

At a time when simple social commentary is welcomed as part of art commerce, David Hammons’ pieces pack a particularly complex and satisfying punch. His style is as cool as that of Marcel Duchamp, his barbs as vitriolic as those of Amiri Baraka. With an easy sense of material, Hammons turns the neighborhood basketball hoop into political theater. He nudges the sacred liberal cows of assimilation. He critiques the patronage patterns of the poor. And he gives the public, in galleries and on the street, elegant, thought- provoking sculpture.

At P.S. 1, over 20 years of Hammons’ work demonstrated his unerring eye for both formal and conceptually textured juxtapositions. Bottlecaps become as decorative as cowrie shells, a rusty plow part turns into a bodice for an antebellum petticoat. It’s offbeat, timely, idiosyncratic work. In one room he reconstructed his controversial Washington, D.C. mural of a blond Jesse Jackson. Another room was turned into a surreal chapel, with piped-in gospel music and phosphorescent statues of Jesus suspended from the ceiling.

David Hammons likes to tweak the hand that feeds him, from selling snowballs in winter to selling colored air at this latest exhibition. Ace, notorious for its cavernous, ever taunting, elegantly bunkerlike spaces, has bushwhacked many formidable artists’ attempts to fill it. Hammons, in his sly way, took the challenge by not filling it at all—or by not filling it in the expected way.

At the opening, visitors walked through the monumental doors as if through the Gates of Hell into a murmuring darkness the wattage of most sci-fi thrillers. After a moment of adjustment, we noticed what seemed to be a font (it was actually a wok sawed in half) of luminous blue. A young woman reached into it and handed each spectator a disc the size of a quarter with a tiny blue light that could be turned on and off, like an electric firefly. Walking with light in hand was like taking a magical mystery tour through the enchantingly transformed rooms.

“ ‘David Hammons: The Unauthorized Retrospective’ at Triple Candie”
By Elisabeth Kley
May 2006

The Triple Candie gallery fruitlessly pursued a project with the notoriously elusive artist David Hammons for several years before embarking on the brilliant, Duchampian gesture of presenting an unauthorized retrospective of Hammons’s work using reproductions taken from books and the Internet. Every available example of Hammons’s output from the 1960s to 2004 was printed on letter-size paper and taped in chronological order to plywood panels nailed to the walls. A space was left at the end in case something new appeared...

In Bliz-aard Ball Sale (1983), one of Hammons’s most brilliant performances, he sold snowballs from a table on a Harlem street. And in Concerto in Black and Blue (2004), visitors provided with flashlights made their way through the enormous vacant rooms of Ace gallery, themselves the exhibition. For a reclusive artist who specializes in such ephemeral work, this made an ideal retrospective.

“Looking at Seeing: David Hammons and the Politics of Visibility”
By Andrew Russeth
February 2015

It’s anyone’s guess what Hammons has planned for Yonkers. Perhaps there is a clue in the catalogue for his 1993 show at the Illinois State Museum in Springfield, Illinois, his hometown, in which he talks about having a private museum there, a place to show his work. It might also be a place to show other artists’ work—either a fully functioning commercial gallery or a nonprofit alternative space.

The week before Christmas, I made the trip to the gallery’s future site. The BxM3 bus dropped me off at Radford Street on South Broadway, the town’s main commercial strip. There’s a McDonald’s, a smattering of pizza places, a non-chain pharmacy, a few vacant storefronts.

The building that Hammons bought is a 5-minute walk away, past a few modest suburban homes and a block of public housing. It’s next door to the community affairs office of the Yonkers Police Department. There’s a storefront church and soup kitchen nearby, but otherwise it’s a sleepy section of town.

Hammons’s space, at 39 Lawrence Street, is a one-story brick building with tall ceilings, filling a lot that measures two-thirds of an acre, about 29,200 square feet. According to property records, an entity called Duchamp Realty LLC, which is registered to the artist’s home address in Brooklyn, bought it for $2.05 million in January 2014. Construction permits for roof repair, issued a few months before I visited and valid well into 2015, were plastered over a door.

Whatever the Yonkers gallery becomes, it will join many of Hammons’s works as a marking, and reconfiguration, of public space. Slipping just beyond city limits, it denotes a hallmark of our time: artists’ flight from the moneyed playground that New York has become. “I’ve always thought artists should concentrate on going against any kind of order...but here in New York, more than anywhere else, I don’t see any of that gut,” Hammons told the art historian and curator Kellie Jones in 1986, anticipating this moment. “Because it’s so hard to live in this city. The rent is so high, your shelter and eating, those necessities are so difficult, that’s what keeps the artists from being that maverick.” Perhaps “Duchamp Realty LLC” is another clue: one might see the gallery as an assisted readymade, a former industrial space redirected toward a new purpose.

On the day I visited the site, the sound of a jackhammer was ringing through the neighborhood. It seemed to be emanating from within the building, but there was no obvious way in. The gates were down and locked, and looking through the high windows, I could see the sky peeking through sections of the roof that were missing. I bought a slice of pizza and headed back to Manhattan.