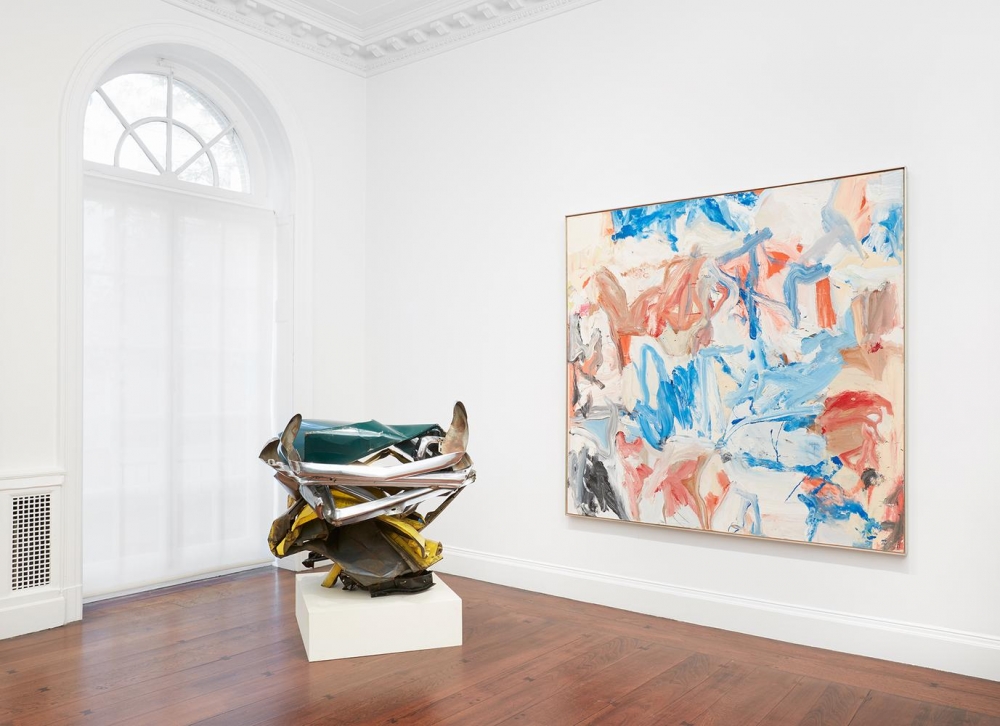 In the show Chamberlain/de Kooning, currently on view at the Mnuchin Gallery in New York, 12 sculptures by the artist John Chamberlain (1927-2011) share space with seven works by his peer, the painter Willem de Kooning (1904-1997). The pairing shouldn’t be provocative. After all, both are tied to abstract expressionism, and both artists shared a (stated) affinity.

Yet this exhibition, which took the gallery’s owner, Robert Mnuchin, approximately a year to assemble, has made waves in New York’s art world. That’s partly because of the quality and breadth of the work on view—there are four rare, late de Kooning "landscapes"—and also because the show forcefully makes the case for parity between the two artists.

If this argument were made by a museum, that's where it would end. But because it’s being made by a commercial gallery, the equality argument has market implications, too.

Chamberlain’s most expensive work at auction was a 1958 work, Nutcracker, which sold in 2011 at Sotheby’s New York for $4.79 million. (The works on view at the Mnuchin gallery range from $1 million to $5 million, according to the gallery.) De Kooning’s highest price at auction, in contrast, is more than $66 million, achieved in November, when his Untitled XXV sold at Christie’s New York.

What causes work by one artist to sell for multiples of that of a peer? Among a variety of factors, the big ones are medium bias (people tend to pay more for paintings than sculptures, though there are exceptions), name recognition (de Kooning is objectively more famous than Chamberlain), and aesthetic preference (people might prefer a painting to a hunk of rusting metal in their living rooms). These factors and others have conspired to push de Kooning’s prices far above those of Chamberlain.

Within the context of this show, that price discrepancy begins to look like a glaring market inefficiency: Assuming that the two artists are roughly equals, and assuming that de Kooning’s market is priced correctly, Chamberlain’s work would be, by definition, a bargain hiding in plain sight. Whether that’s true is a question that only a small group of very, very wealthy collectors can answer.