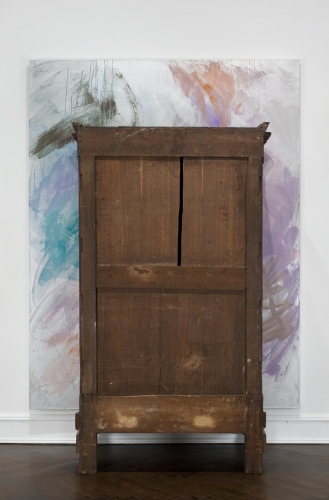 As I enter L&M Arts gallery on Manhattan’s 78th Street, I find myself wondering whether I’ve mistaken the opening date. It looks as if David Hammons’s show is still being installed.

One canvas is covered with plastic, plastic hangs from the ceiling between the two exhibition rooms and there are no explanatory labels or signs to ease my confusion -- except for what looks like a charcoal mark on one wall. It’s Hammons’s signature.

“He didn’t want any sign, so he signed on the wall,” says gallery director Sukanya Rajaratnam. “It’s very him.”

An installation and performance artist, Hammons mounted the L&M exhibition himself. There are big, colorful canvases covered up with various materials -- including several kinds of plastic, a towel and a piece of silk.

Hammons has also done the series “Body Prints,” made by pressing his grease- or margarine-covered body onto paper. One is currently on view at Manhattan’s Museum of Modern Art, which owns several. In another piece, called “Higher Goals,” he attached basketball backboards and hoops to telephone poles in Brooklyn’s Cadman Plaza.

One work at L&M is a canvas almost entirely hidden by an armoire, leaving most viewers outside the furniture trade in a state of frustration.

“It’s deliberately inaccessible,” says Rajaratnam. “The armoire is a metaphor for all of Hammons’s work.” Also fairly inaccessible are the prices, ranging from $800,000 to $1.2 million.

Getting as close as I can to one of these intriguing works, I’m not surprised to find that its blue plastic veil isn’t hiding an unfinished work. There’s a complete painting back there. Hammons delays judgment and sustains suspense -- he gets a lot of mileage from what might well have been a Hefty bag.