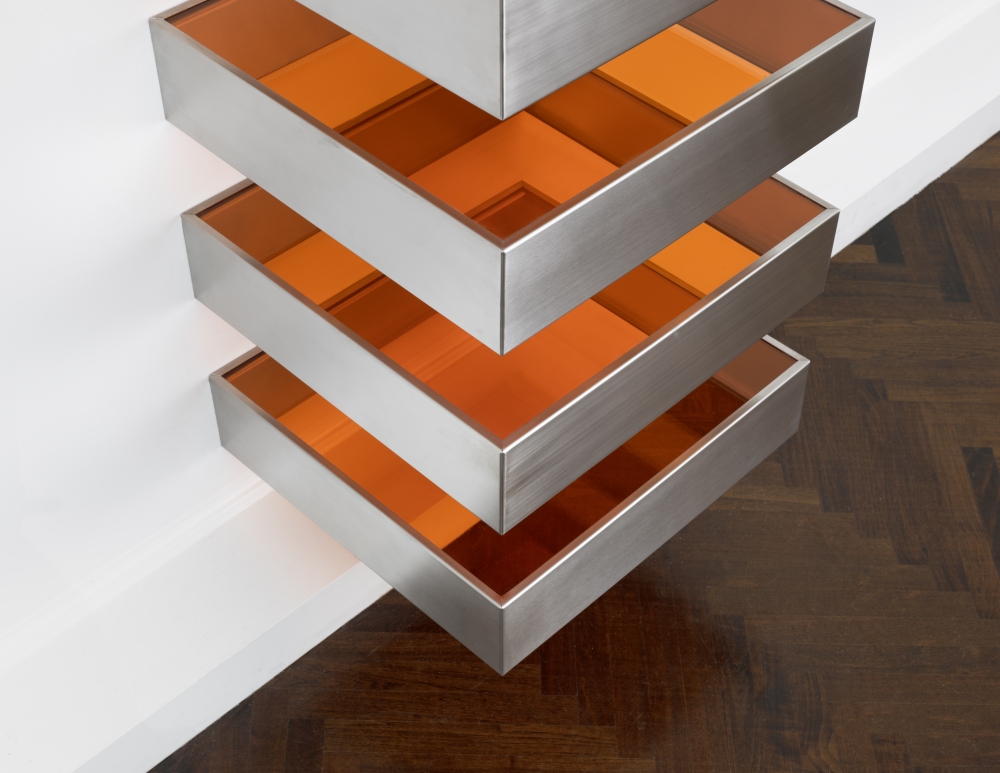 Austerity wasn’t minimalist artist Donald Judd’s only calling card. At least not in the opinion of art dealer Robert Mnuchin, who is fond of the specific body of work by Judd known as “stacks”: the cool, vertical, wall-mounted arrangements of iron-and-Plexiglas boxes that are, in their industrial materials and repetitive form, evocative of skyscrapers and mass-produced goods. In the right lighting, the colorful examples of these cast gem-toned shadows.

“They’re very glamorous,” Mnuchin said about the stacks over the phone from his office at Mnuchin Gallery on the Upper East Side. “In minimalism you don’t think of a work being glamorous. To the contrary, it’s very quiet, it’s subtle, subdued.” Nonetheless, a show opening on September 26, “Donald Judd: Stacks” will attempt to show Judd’s sultry side.

Judd’s stacks have been included in surveys of the artist worldwide, and are owned by major collections such as those belonging to the Museum of Modern Art and the Guggenheim, among others. But this show, which will offer ten works across a range of color and industrial materials, culled from institutions and private collections, is being touted as the “first-ever” exhibition devoted to Judd’s work with this sculptural form.

In larger, more comprehensive surveys, in which these smaller works have been grouped together with Judd’s hefty dazzling floor sculptures such as his aluminum boxes, the stacks have risked appearing as one and the same, according to Mnuchin. It’s an effect he’s noticed in the way people perceive paintings of Abstract Expressionist Mark Rothko.

“Sometimes people who don’t look at the work, and don’t think about the work, say Rothko painted [only] one painting,” said Mnuchin. “That’s absurd. There’s tremendous range in what Rothko did, in color and form. There’s a tremendous range in Judd’s stacks, in the combination of materials, the combination of colors. I think we will see another dimension.”

The earliest specimen in the show is a 1968 work “Untitled DSS 120,” of ten stainless steel boxes with warm amber Plexiglas, while the most recent work, “Untitled (Bernstein 90-11)” (1990), is a more austere anodized aluminum number lacquered in black autobody paint with clear Plexiglas.

It’s unclear how many stacks there are in existence, but some put this number at around 100. They were integral to Judd’s exploration of the interplay between space and object. Of his works that have come up at auction, the stacks have taken the top spots with the highest being “Untitled, 1989 (Bernstein 89-24)” (1989), a work composed of copper and red Plexiglas, which sold for $10.2 million at Christie’s New York last November.

The fall show at Mnuchin Gallery promises to be one in a long line of highly focused museum-quality shows that Mnuchin has staged over the years, first under the banner of C&M Arts (with partner James Corcoran), then under L&M Arts with his partner Dominique Levy (with whom he recently parted ways), and most recently at his eponymous gallery. “Picasso: The Classical Period” (2003), “Damien Hirst: Medicine Cabinets” (2010), and this year’s “Ellsworth Kelly: Singular Forms: 1966-2009” are just a few. This time he’s focusing on one slice of Judd’s vast practice.

“I have enjoyed picking those moments and taking a subject of museum importance,” said Mnuchin. “Judd’s stacks fit that bill.”