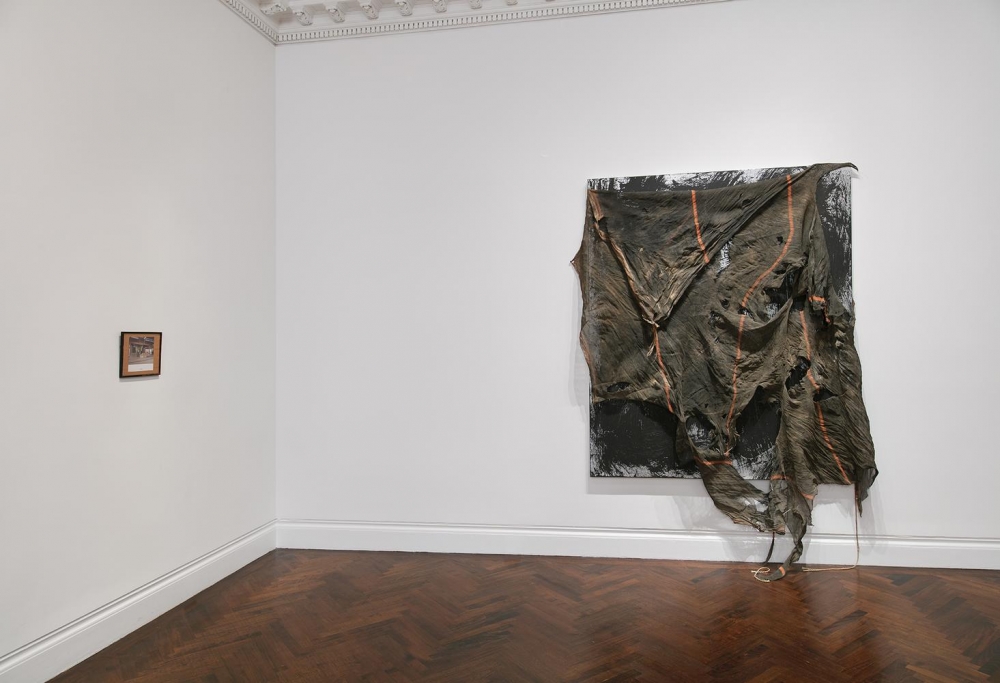 One day last week in the conservation lab at the Detroit Institute of Arts, director Salvador Salort-Pons gazed at the museum's latest acquisition and smiled as broadly as a kid who just found exactly what he wanted under the Christmas tree.

Standing in front of him was David Hammons' "Bird" (1990), a remarkable sculpture by a seminal contemporary African-American artist. Comprised of found objects, the piece uses a 6-foot tall white Victorian bird cage stand as its spine — except where the actual cage would hang, Hammons has substituted a basketball encased in chicken wire, with a few wispy feathers attached to the ball. With a likely price tag of at least a million dollars, it would be one of the most expensive pieces of contemporary art the DIA has bought in two decades.

With the Hammons purchase approved by the DIA board on Wednesday, the museum formally launched a landmark, three-year, multimillion-dollar initiative to deepen its commitment to African-American art. The plan includes acquisitions, exhibitions, artist commissions, community partnerships, staff development and internships. Driving the initiative is first-year director Salort-Pons' ambition to broaden the appeal of the DIA, making it more relevant to metro Detroit's culturally diverse audiences and starting with the city's overwhelmingly black majority.

The new direction represents the first major shift in programming and collecting priorities since the Spanish-born Salort-Pons, the 46-year-old former DIA curator of European art, succeeded Graham Beal as director last fall. The commitment could transform the DIA into a true national power when it comes to collecting, exhibiting, studying and interpreting African-American art.

"We want to be the best," said Salort-Pons.

The Hammons sculpture heralds the future. The artist, who turns 73 next week, is known for creating art that traverses racial fault lines in America, slyly merging lacerating satire with poetic lyricism. He's a magician, a trickster. "Bird" — a wry reference to the nickname of the black modern jazz saxophone hero Charlie Parker and the white basketball star Larry Bird — is disarming fragile. The ball hangs perilously in air, suspended yet trapped within a cage. The elegant line of the stand and portentous swirl of wire suggest drawing in space. But the razor-sharp meaning cuts to the bone.

The DIA will put the sculpture on display in the galleries this fall.

Since the $5-million GM center was endowed in 2000 near the start of Beal's directorship, and curator Valerie Mercer was hired to run it in 2001, the DIA hasn't originated a single major special exhibition devoted to African-American art, except for a modest show of paintings by the Ethiopian-born, Michigan-raised Julie Mehretu. The DIA has hosted a handful of African-American exhibitions organized by other museums or prepackaged by private collectors.

​"The museum has failed to capitalize on what it has," said George N'Namdi, founder of the N'Namdi Center for Contemporary Art in Detroit and a prominent dealer of African-American art. "This was one of the major collecting spots in the country for African-American art. The museum should be a leader in this area for the population that's here, and because it could really distinguish itself in this area."

The new initiative promises to shake out the cobwebs. In addition to investing millions to acquire African-American art, the museum will be jump-starting a more aggressive exhibition program, including a collaborative show next year with the Charles H. Wright Museum of African American History pegged to the 50th anniversary of Detroit's 1967 riot (which some call a rebellion).

There is a lot at stake, said Darren Walker, president of the Ford Foundation in New York, and an African American.

Walker said the Ford Foundation — which contributed $125 million to the grand bargain during Detroit's bankruptcy that shored up city pensions and protected DIA art from sale — would offer the DIA financial support for its African-American programs. Walker said Salort-Pons' plans were the opposite of tokenism and have the potential to build audiences, bridge divisions of race, class and culture and introduce all Detroiters to artists like Hammons, who ranks at the forefront of living American artists of any stripe.

All of the money to buy art at the DIA comes from restricted endowments that fund purchases in different areas — contemporary, American, European, etc. The income from those investment funds – by law – must be spent on art. No tax money is used. Though annual acquisition budgets fluctuate, the DIA typically spends $2 million to $3 million annually on art across all disciplines.

Before buying the Hammons, the DIA had accrued $3.7 million in its contemporary art kitty. Most of those dollars will be funneled into African-American art in the coming years, including "Bird" and an important multipaneled photograph by Hank Willis Thomas that the DIA also recently purchased. The DIA has not earmarked a specific dollar amount it will spend on African-American art, but it's the top priority within the contemporary discipline.

How much the DIA spent on "Bird" is unclear. DIA officials, which bought the piece from the Mnuchin Gallery in New York, declined to release the price, but experts consulted by the Free Press suggested a likely cost of between $1 million and $1.5 million.

The market for African-American art has heated up considerably in the past 15 years, and if the DIA waited much longer to get in the game, it would not be able to afford substantial works by the famous artists it needs to fill significant gaps in its collection. Even now it could be too late for some of the artists on its wish list, such as contemporary figures like painter Mark Bradford and painter-sculptor Kerry James Marshall, whose prices are now topping seven figures, or Harlem Renaissance hero Aaron Douglas, whose works are both expensive and scarce.

"This is a time when you can still get great works, but the budget will have to be bigger than it was before," said Michael Harris, associate professor of art history and African-American Studies at Emory University in suburban Atlanta.

A large abstract pastel drawing of furious energy called "Twin Tornadoes" by the late Gilda Snowden, a beloved African-American artist from Detroit, hangs on the wall in Salort-Pons' office. It's a symbol that he means business. In an interview last week with the drawing over his shoulder, he said that he came into the job with the idea of trumpeting diversity and African-American art. But last fall's "30 Americans" exhibition at the DIA inspired Salort-Pons to go big.

A touring show of contemporary African-American art from the Rubell Family Collection of Miami, Fla., the exhibition generated greater excitement among a more diverse audience than the DIA has seen in memory. Attendance reached 46,560, 16% higher than the museum's original goal, with African-Americans totaling 41% of the visitors.

African Americans make up about 22% of metro Detroiters but only 10% of DIA everyday visitors. Closing that gap is a key goal of the new initiative.

"How the show resonated with visitors told us we could be more successful with the African-American community," Salort-Pons said. "I remember seeing the visitors being very excited, even the security guards. When I read the cards left at the response center at the end, you could feel the pride that so many African Americans felt in seeing the art of their own community at the DIA."

The founding of the GM Center in 2000 paved the way for the creation of a suite of African American galleries, though the DIA also displays works by black artists throughout the museum. As the in-house expert in African-American art, curator Valerie Mercer is especially thrilled that her specialty is moving to the top of the pecking order. She said that she always felt supported by Beal during his directorship, but some of her ideas for exhibitions were met with concerns about attendance and there was a general reluctance in some quarters of the museum because the terrain was unfamiliar.

"I think there was ambivalence about the GM initiative," she said. "It's an education for everyone."

The fault lines do not only run along a black-white axis. In 1999, as the DIA was preparing to open a show of prints by women in the museum's collection, a sexually charged five-panel silhouette by Kara Walker, an African-American artist known for the rawness of her antebellum imagery, was removed from the show after complaints from some members of the Friends of African and African American art who found the racial and sexual content too graphic. The Walker print, "A Means to an End: A Shadow Drama in Five Acts," still has never been displayed at the DIA — though a similarly provocative Walker print was included in "30 Americans" without incident.

One reason is that after the DIA's audience-friendly reinstallation in 2007, the museum is a lot more adept at presenting controversial work in ways that can both explain its meaning and defuse tensions at the same time. Still, DIA officials said there was no way to know if the Walker would go on display as its African-American initiative goes forward.

Though it happened 17 years ago, the controversy over the Walker is a reminder to DIA leaders that the African-American community is no more homogeneous in its opinions than any other group. "People view race relations differently in different periods," said Rhonda Welburn, an African-American attorney and DIA board member. "It's going to happen."

Welburn, a member of the collections committee that had to approve the Hammons for purchase, said that it's the museum's job to help visitors understand what challenging art is about and why it's on view. To that end, she can't wait for the Hammons to go on display this fall.

"I can't wait for the school kids to come through and have the curators and educators engage them in the discussion," she said. "I want to see what the students think about it."