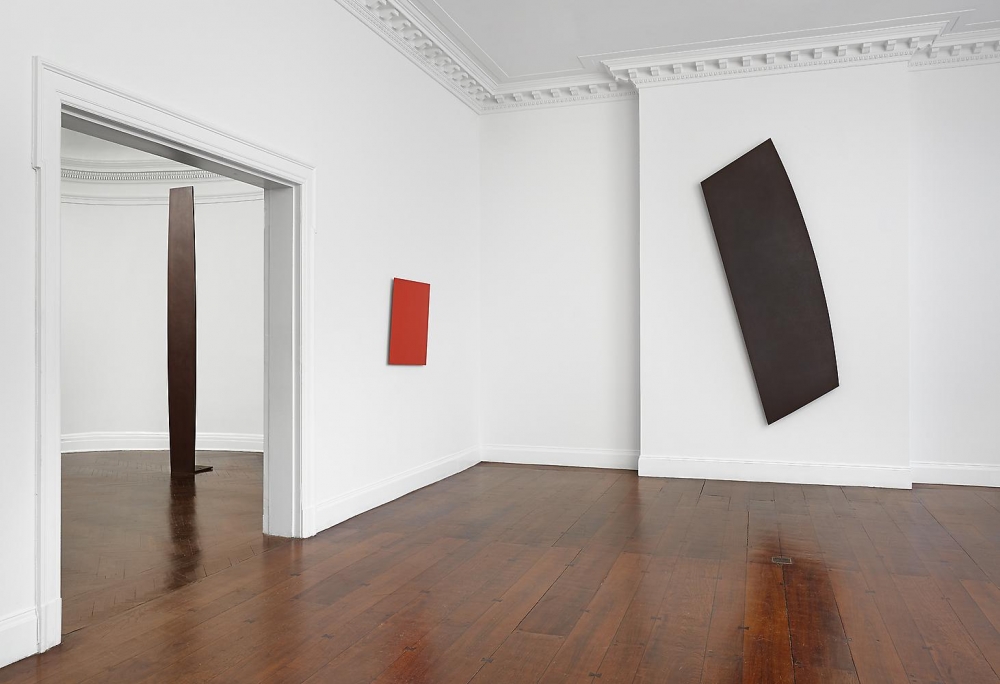 The best way to experience the array of exhibitions celebrating Ellsworth Kelly’s 90th birthday is to start downtown and work your way uptown, which is to say: begin with his most recent pieces and work backwards in time, allowing the present to foreshadow the past, playing the day like Jeopardy!, matching questions to the answers you already have. The newest pieces are at all three venues of Matthew Marks Gallery in Chelsea. The largest space, on West 22nd Street, has relief-like paintings and aluminum, wall-bound sculptures with slick, reflective surfaces. More exciting is a single piece displayed at the tiny, sky-lit Marks venue next door. Gold with Orange Reliefs (2013) could be a metaphor for Mr. Kelly’s career: it at once displays his continued propensity for experimentation (it’s the first time he’s worked with metallic paint) and his perpetual revisiting of previous experiments (with its two orange shapes like inverted commas, the arms of swimmers doing the crawl, on a gold ground, it is the large-scale version of the small 1962 collage displayed across from it).

Mr. Kelly has a gastronomist’s sensitivity as to how a viewer should experience his work. At Marks’s West 24th Street location, a corridor lined with white and gray works serves as a palette cleanser for the main event, a 50-foot, four-panel composition featuring swooping shapes in, consecutively, red, blue, yellow and green, a sequence of colors he has worked with throughout his career. The same curving shape is positioned at different angles on each white support, in the rhyme scheme ABAC, like the second stanza of William Blake’s “The Divine Image.” The particular shape will be familiar to those who know Mr. Kelly’s work—as art historian Pepe Karmel points out in his essay for the Mnuchin show, it is related to a photograph the artist took early in his career, of the pendulous shape made by a swing-set rope. His art has always been wily that way—as much as it would seem to wear the badge of total abstraction proudly, it maintains a foothold in the real world. Mr. Kelly’s is an editor’s art, paring the world down to essentials. It functions by metonymy, the part for the whole. (His loquacity in person is worth mentioning here—the man, filling in life’s messily digressive details, is the perfect foil to his paintings.)

It’s apt that MoMA should bring together the 14 paintings in Mr. Kelly’s “Chatham Series,” which hasn’t been seen in its entirety since its 1972 exhibition at Buffalo’s Albright-Knox Art Gallery. It was in 1970, just two years before his full-scale MoMA retrospective, that Mr. Kelly, then in his late 40s, moved from Manhattan to the small town of Chatham in upstate New York, where he found a spacious studio on Main Street. The paintings he made there are two-panel pieces in an upside-down L shape that use combinations of black, white, red, yellow, blue and green. Their large scale and experimental format—it was the first time Mr. Kelly had worked with that particular shape—evince a confident artist in late mid-career. As usual with Mr. Kelly, there is a hidden reference here: the L shape formed by the outstretched wing, torso and leg of the Victory of Samothrace. In a clever move on MoMA’s part, you can see out from the show to an early Frank Stella painting in the museum’s permanent collection galleries; Mr. Stella was the first American artist to make shaped canvases, in 1960.

Just as interesting as the main event at MoMA is a small side gallery containing 40 works on paper that Mr. Kelly made in Paris in 1951, intended to comprise a book called Line Form Color, a sort of dictionary of abstract forms. Revealing the influence of artists ranging from Malevich and Mondrian to Josef Albers, Jean Arp, Paul Klee and Constantin Brancusi, these notebook-size pieces are in many ways the key to Mr. Kelly’s oeuvre (to date). They read as a mission statement, or style sheet, to which he has remained remarkably faithful over the decades.

Finally, uptown, at Mnuchin Gallery, a modestly sized exhibition focuses on Mr. Kelly’s singular forms, or one-panel pieces, from 1966 to 2009. The show is a feat of elegant exhibition design, with the second floor’s swooping Blue Curve (1996) displaying the panache with which Mr. Kelly makes the wall a facet of the artwork. Another standout is Gray Panel II (1977), in a hue so diaphanous as to seem on the verge of dematerializing. Bronze Curve (1987) is a snappy work, its metallic-looking surface a distant precursor to Gold with Orange Reliefs. The show’s crowning moment is Curve XI (1974), a totem-like sculpture made from weathering steel that stands like a sentinel at the top of a curving staircase.

A handful of artists have exhibitions at multiple venues in the city at the moment, notably Jeff Koons and Paul McCarthy, who both often work on a monumental scale. As worthy as those exhibitions are, the Kelly shows make them look bombastic. It’s not just that there is something to be said for quiet consistency across a lifetime, as defined against eye-popping mine-is-bigger-than-yours-ism. Ironically, given Mr. Kelly’s lifelong project of suppressing painterly gesture, there has always been a warmth to his work where others traffic in cool bravado. It’s like Aesop’s fable about the sun persuading a traveler to remove his coat after the wind fails to do so, despite blowing mightily. “You have won,” says the wind. “I see now that gentleness succeeds where rudeness fails.” (Marks, through June 29, 2013; MoMA, through Sept. 8, 2013; Mnuchin: through June 1, 2013)

Gallerist NY
Back To Top