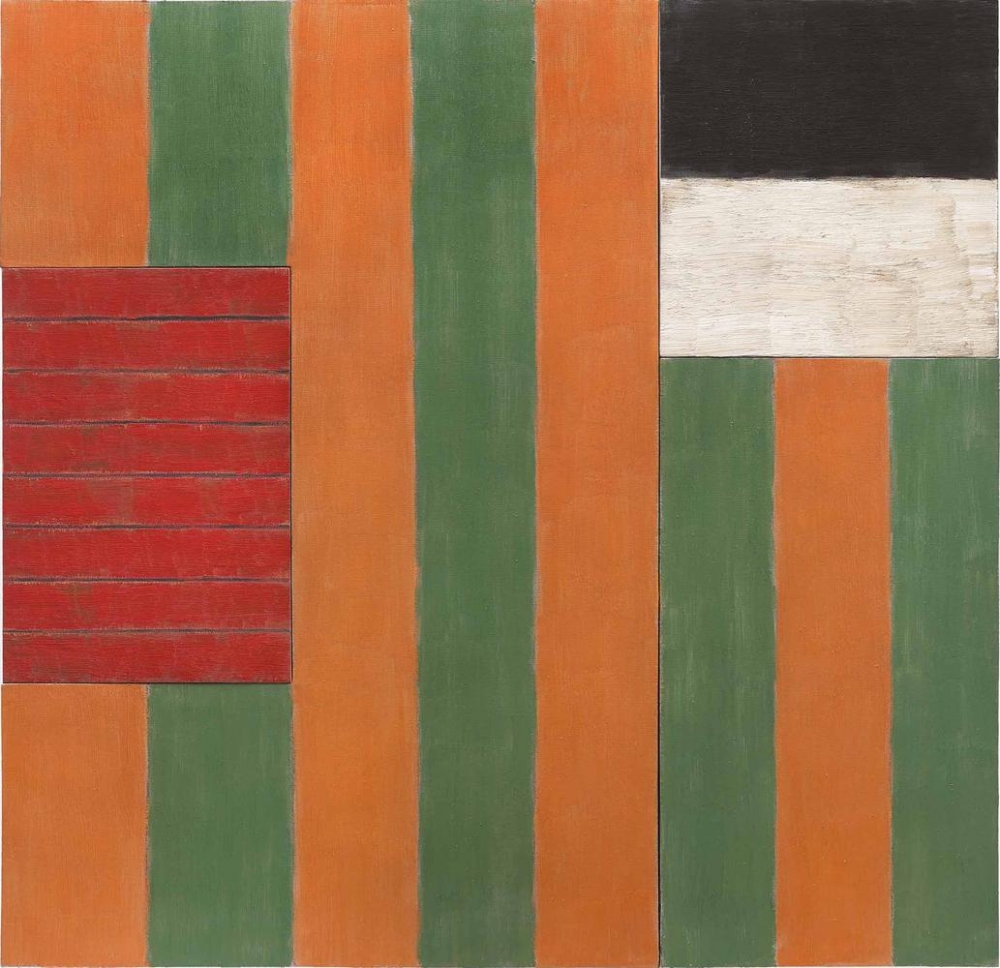 Sean Scully has a deep emotional attachment to his art, so he has no time for coolness of today’s abstraction – not to mention Fox News and Goldman Sachs

Sean Scully once remarked that the Brits don’t much go in for outsize presences in the art world. It was in the UK, however, that the artist showed that he is unafraid of asserting himself a bit when he feels it is called for. As it was in the matter of his commission to create a sculpture for the new US embassy in London, which is to be celebrated next year. Scully, Irish-born, a long-time Londoner and longer-time New Yorker, is best known for painting resonant geometric abstractions, but he is also a highly regarded sculptor. It was a million-dollar commission and he made an abstract work in granite.

‘Fox News attacked it viciously. That awful woman with the smashed-in face,’ Scully said, apparently referring to the lovely Greta Van Susteren, who very recently left the network. The commission was cancelled, supposedly on the grounds of the weight of the piece-which is, yes, heavy – but Scully is convinced it was about the media, not about the weight and most certainly not the money.‘We were charging them a million. And it would have cost a million to produce. I was making nothing from it,’ he says. He unleashed a highly charged critique, comparing Fox News to the National Front, and he toyed with turning its slogan ‘IT’S NEWS WITH FOX NEWS’, into neon and sticking it on his building in New York – plus a vowel substitution in ‘Fox’. It didn’t happen but, as the incident suggests, wishy-washy isn’t the Sean Scully MO.

Scully was born not far from Dublin, and the family moved to London when he was four. ‘I have a funny story about that,’ he says. ‘Well, it’s a little bit sad in a way. I was dragged up in London and I desperately wanted to go back to Ireland. And there was a school trip when I was thirteen. You had to put down a £2 deposit. But I was a chronic bedwetter.’ (This is something Scully has shared with the world before, ascribing it to a difficult family life.)

‘We went to the clinic and got al of the paraphernalia, you know the metal sheets with holes in them, and the bells.’ (These go ring-a-ding if you-know-what happens.) ‘And then you have to remake the bed. It’s this Dickensian idea, a form of punishment. I had a big chart and every day I had to put either a “D” or a “W”. Usually it was “W”. It got closer and closer and closer, the deadline. I got more and more desperate, and in the end I didn’t go and my mother had to ask for her £2 deposit back. I didn’t go until I was 30, and when I went back they were all over me. They are very kind people.’

Scully studied art at Croydon and found he could really draw, so after leaving school became a portraitist for a while. “I was a figurative artist for a few years,’ he says. ‘I was also making gestural paintings and all kinds of things. But I got caught up in the kind of hippysocialist internationalist movement. I went to Morocco in ’67 and I converted to striped painting on my return.’ It would be stripes for ever.

Scully moved to Manhattan in the mid-Eighties. It was a time when the art world, which was dominated by two schools, Minimalism and Conceptualism, neither of which was remotely market-oriented, was intense, brilliant and, by comparison with now, tiny.

‘I was making my Minimal paintings, very severe paintings,’ Scully says. He found allies, one being an older New York artist, Robert Ryman, who was – and is – revered for all-white paintings. ‘He was extremely kind to me,’ Scully says. ‘He encouraged me a lot. He was a wonderful guy. And he even tried to help me get a gallery.’

It was a hinge moment. Marcel Duchamp had declared that painting was dead in 1918, and painting, particularly figurative painting, had regularly been declared to be at death’s door ever since. Then, right at the end of the Seventies, painting sprang back to life, with Manhattan as Action Central. The brush-wielding protagonists of what was soon called Neo-Expressionism were Julian Schnabel, David Salle, Eric Fischl, and collectors materialized brandishing chequebooks, as did museum curators. Very soon the media were latching on. Minimalism and Conceptualism were yesterday and the Neo-Ex art stars were bold-face names in the gossip columns.

LINES OF PROGRESSION
And Sean Scully? The former figurative artist carried on with his stripes regardless. There were several of his pieces from this period in a recent show at Manhattan’s Mnuchin Gallery, including Ne Neo, a work from 1984. Neo-Geo was the name given to a group of artists emerging in Manhattan in the mid-Eighties, Jeff Koons being one, and the most conspicuous painter in the group, Peter Halley, used straight lines and geometric shapes, just like Scully – whose picture titles always mean something. So could the title No Neo be like waving a banner?

Yes. ‘I came on the scene in 1980,’ Scully says. ‘And then, about 1984 I guess, the Neo-Geo painters showed up. These people are Conceptual artists. They don’t even make their work themselves. My work is all about making it myself – it is really expressionistic and emotional. So I turned the title around, as a response.’

His work developed. ‘I pumped up the orientation of the stripes, bars and lines,’ Scully says. ‘The width varies enormously. And you have verticals, horizontals, diagonals, all bashing into each other.’ He will make paintings on separate stretchers, inserting them into the central piece ‘so that the panels collide into each other and make new relationships that are beautiful and uneasy, all at the same time. If that makes any sense.’ Some of the lines are dead straight, I point out. And some are almost cartoony.

‘That’s right. Yes! They almost look like somebody drawing a tree, or a figure. There are big blue bands that almost look like tree trunks or human figures. I try to be very evocative in these paintings. I’m not defending abstraction; I am not a big defender of abstraction. I try to bring it back into the world of associational meaning, so that people can use it.’

As Scully uses it himself. Another canvas at Mnuchin is called Empty Heart.

‘That’s about a very difficult subject.’ Scully says. ‘It’s about the loss of my son. I also painted a painting for him, which is in the Tate – it’s called Paul. The centre of it is, in a sense, ravaged. It turns in on itself. When I got a house in London it was the first painting that I made, because I felt closer to him where he dies. And I managed to get it back off a friend of mine who bought it.

‘My paintings are meant to convey powerful emotions, whereas a lot of abstraction has gone towards a kind of coolness. And the problem with that is that it tends to be decorative. I, for example, was asked to make a painting for the lobby of Goldman Sachs. And I just said no. I’m not doing that. I don’t make paintings for lobbies.’

If you deduce from this that Scully’s stripe paintings have become hugely successful, you are spot on. Last year he became one of the first Westerners to be offered a one-man retrospective by a museum in China. ‘This English guy, Philip Dodd, asked me to do the show. I couldn’t understand why. He said, “You’ve got a huge following in China.” So I said, “All right, I’ll do it.” Why not? They seem to be very excited about abstraction – in China abstract painting was banned 25 years ago, because abstraction is highly charged with a spiritual agenda. And it’s also impossible to edit and control. So you either let it in or you don’t. And now they let it in.

‘I had the show and it was successful on an unprecedented level. In fact, in CAFA [Art Museum] in Beijing, after my exhibition they opened a department of abstract painting as  a homage to me, which is funny. I’m born in Ireland and now I have come to be this incredible cultural figure in China. And then they asked if I would do another show. So I said, “Ok, let’s do another one.” Scully was flying to China to work on it the day after we spoke.

Why have the Chinese embraced abstraction so fervently? ‘Well, their language, when it’s written, is abstract, it’s visual. So they take to it like ducks to water. They’ve gone the other way from us, because they’ve come to abstraction, I suppose, last. Whereas we cast it aside.’ It’s no longer a cast-off, he thinks. “Abstraction is back big-time. Wouldn’t you agree? American abstract painters, like Sterling Ruby, Mark Bradford and Mark Grotjahn… Charline von Heyl… Amy Sillman… I think they are doing wonderful work.

‘Abstract has become more emotional again, and that’s where I was all the time. You know, I was never cool enough for a lot of abstract painting exhibitions in the Eighties. I was always the odd one out, the emotionally charged, slightly ridiculous figure. But now all these other people are making paintings that are beautiful – fantastic surfaces! It’s come around to where I was. So it’s a good time.’