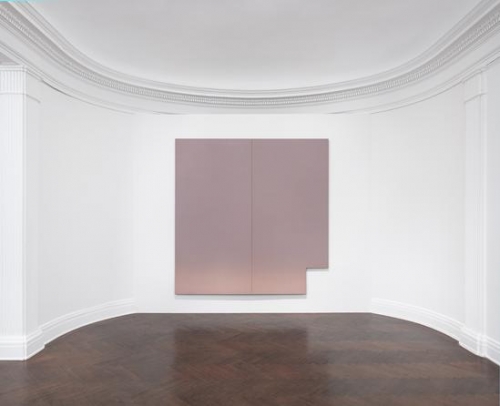 How does visual art develop? Ernst Gombrich influentially argued that figurative art progresses thanks to progress in illusionism. By stages, he claimed, images become ever more accurate representations of the subjects that they depict. Since abstract art has no subjects in that sense, its development has to be different. In Robert Mangold’s gallery exhibitions, normally one sees only his most recent works. But this mini-retrospective of fourteen works, installed on two floors of the Mnuchin Gallery townhouse, provides the material for such an extended narrative, telling the story of his development over four decades. Mangold works in series, reworking a visual motif in varied colors and, sometimes, in paintings of various sizes until he has exhausted its potential.

Pink Area (1965), the first work on display, made with sprayed oil on Masonite on plywood, is a square picture made of two vertical panels, with a rectangle removed from its bottom right-hand corner. Here, one can see how at the start of his career, Mangold was aware of the potential of minimalist literality and, also, of the importance of Andy Warhol’s employments of blankness. Then, from a visually radical movement the following year, came 1/3 Gray-Green Curved Area (1966), an oil on Masonite composition of two joined panels which together comprise a third of a full circle. Soon after, he transitions to working with acrylic and pencil on masonite, outlining his geometric forms on shaped panels, such as the three half-circle canvases of ½ W, V, X Series (Orange, Green, Blue) (1968).

Mangold’s motifs, which are neither graceful nor homely, and certainly not distractingly elegant, never appear awkward or gawky. Eschewing expressive brushwork, his pictures are inordinately calm. Like Alex Katz’s figurative works, these ‘cool’ abstractions reject the ‘hot’ rhetoric of Abstract Expressionism.

Mangold is an admirably consistent and marvelously self-critical painter. Who could have imagined, following Pink Area, how inventive he would become? Like Willem de Kooning, he has an ability to keep abstract art moving in seemingly unpredictable ways that appears miraculous. Because his motifs apparently have no intrusive allusions to the structures of the visual world outside of the gallery, his works press you to concentrate on undistracted looking, and in turn provide richly suggestive aesthetic experience. What has always puzzled me about Mangold’s practice, however, are his transitions, and how he determines when his schemata are exhausted. Despite all of the attention it has attracted—thought, scrutiny, and investigation—his seemingly straightforward art retains its mysteries.