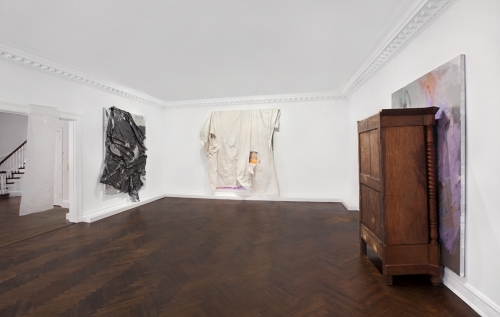 In 2003, artist David Hammons presented "Which Mike Would You Like to Be Like," three vintage microphones standing alone in a room, representing three Michaels: Jackson, Tyson and Jordan. It was  an ironic commentary on role models for African- Americans, a funny play on words, a great pun, all of the above; that's the magic we've come to expect from David Hammons. He's given us several memorable art moments: shoes slung over a Richard Serra sculpture, trees decorated with winos' empty bottles; he famously sold snowballs outsidean art school. A conceptual artist in the style of the great Marcel Duchamp, he even once re-bound Duchamp's Catalogue Raisonne as the Holy Bible.

Mr.  Hammons is arguably the most famous living African-American artist, and a serious cult figure in the art world. It's not that the second half of the 20th century doesn't have others, like Martin Puryear, Kara Walker, Glenn Ligon or Mark Bradford. But face it, they are far too few: The art world is sadly still a white man's world.

So walking into a David Hammons show at the very grand L&M Gallery on the Upper East  Side   is a weird anomaly on a few fronts. Since he makes objects and avails himself of "ready-mades," the notion of a Hammons painting show is a question mark in itself. And this show of paintings, by an artist who doesn't paint, relates quite literally to homelessness. I braced for a lecture: artwork that revolves around issues of race, politics and inequality can get didactic, reductive and really boring. David Hammons has been working since the late '60s, but, today, I'm living in the age of Obama.

To be frank, why would collectors like me, who are for the most part wealthy and white, want to buy work that tells a story that's not their own? Too often, we, the "oppressors," are supposed to come into a gallery, understand the work's importance and collect it because it's "meaningful," and perhaps as a way to show compassion. I'm really not into buying self-indulgent work by  artists who are going to lecture the bourgeois society about the realities of life. That's stuff that dealers can pawn off on some overeager naif or stick back in storage.

But when I walked into this show, a very familiar room took on a completely different vibe. The work hung with tremendous gravitas, and I could feel something important was happening in this building. The new show at L+M is indeed a show of Hammons paintings, but very unusual ones, because each painting is draped in a dirty plastic tarp, to the extent that one cannot see the picture and can only glimpse at it through the tears and the rips and the dirt.Think of them as paintings draped in dirty plastic, the kind of objects a homeless person rolls up in on a cold night before they go to sleep near a subway grating or a church stoop.

Mr. Hammons is no painter and doesn't care to be; he's making fun of painting altogether, because when you lift the tarp, you find the same kind of splashy colorful inane gestural painting that you can find hanging in many Chelsea galleries right now. He is indifferent to them; he  covers them and gives them shelter, but what convinced me was the beautiful effect the ripped and dirty draped plastic creates as it cascades over the canvas and rolls down the wall, spilling onto the floor.

There are plenty of art historical references we can find here, from Alberto Burri's "Plastico" masterpieces, to the plastic sheets in Robert Rauschenberg's combines, and yes, I did detect a little Steve Parrino and a touch of Rudy Stingel, too, but the homeless, dirty, discarded, left-out- in-the-cold painting hanging in this Upper East Side gallery is all Hammons.

The work is about class, and the strange intersection of the aesthetics of poverty with Arte  Povera and Abstract Expressionism. The whole concept of art and money and class is a phenomenally complex one, too often over-sensationalized and oversimplified. Mr. Hammons gives it to us in its full complexity, presenting the queasy idea of paying six figures for a painting that hangs under a dirty tarp while nearby on 65th Street, homeless people are showing up in real dirty tarps and getting fed dinner in the basement of the Park Avenue Armory.

Of course, it may be be perverse to begin with for an artist to use this entire socio-art-gallery system to make a lot of money. Unlike most artists who produce work and consign it to their gallery for sale, Mr. Hammons reportedly makes the dealer buy the whole show for cash up front, so he makes out whether it sells or not. This all might be viewed as a part of his perverse and complex relationship with the art market, or perhaps he just can't bear the idea that something he makes doesn't sell. But it doesn't much matter, because the work and the show, for those who are willing to think it through, puts him at the very top of his generation.

That's not what other people I spoke to took away from it. One well-known collector told me he hated the show because it required too much explanation--but Mr. Hammons' work speaks for itself. A savvy dealer even told me he didn't like it because he couldn't see the encased pictures--but you weren't supposed to. All of this leaves me to conclude that David Hammons has to be one of the most misunderstood artists working today.

This is definitely going to be considered one of the best shows of the year, so go see it (It's up through Feb. 26). One of the show's triumphs is that it makes me think perhaps we should all also stop in at a homeless shelter and learn something there, too.