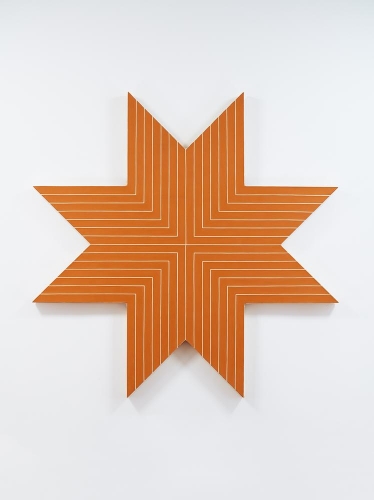 This beautiful exhibition celebrates the rigor and glamour of Minimalism, its dual ability to reduce art to a ready-made, quasi-industrial essence while also functioning as impeccable interior décor. The setting — an exquisite double- width townhouse on the Upper East Side — contributes greatly to the effect, as does the sometimes color- coordinated placement of the art.

The through line here is the sculpture of Carl Andre, perhaps the truest and most radical Minimalist of all. Mr. Andre’s signature floor-hugging works, formed from softly glowing tiles of lead, zinc and copper, could function unobtrusively as avant-garde rugs. But they also counter Minimalism’s aloof untouchability, because they are meant to be walked on and must be, for the full Andre experience.

The exhibition pairs 10 of Mr. Andre’s sculptures with 10 works by his Minimalist contemporaries, including Frank Stella, Agnes Martin, Donald Judd, Robert Ryman and Sol LeWitt. Sometimes the pairings are drop-dead gorgeous, as when Frank Stella’s orange-striped star-shaped painting “Port Tampa City,” from 1963, hangs above a copper Andre. One of three nonwalkable Andres here is the little-known “32-Part Reciprocal Invention,” which consists of 32 pieces of used rebar, found in pieces roughly 4 to 23 inches long arranged and spaced in two rows according to length. The piece is paired with a Judd stack of wall boxes — this one in stainless steel and blue plexiglass. One of Judd’s long, narrow wall reliefs, composed according to the Fibonacci sequence, would have been the ideal partner.

The only non-Minimalist represented here is the sculptor John Chamberlain, whose use of crumpled car bodies from local junkyards echoed the Minimalists’ proclivity for ready-made objects and materials available from New York factories. These businesses were steadily disappearing from the city’s workscape during the 1960s and ’70s, Minimalism’s heyday, a point developed impressively in the catalog essay by the art historian Alastair Rider.