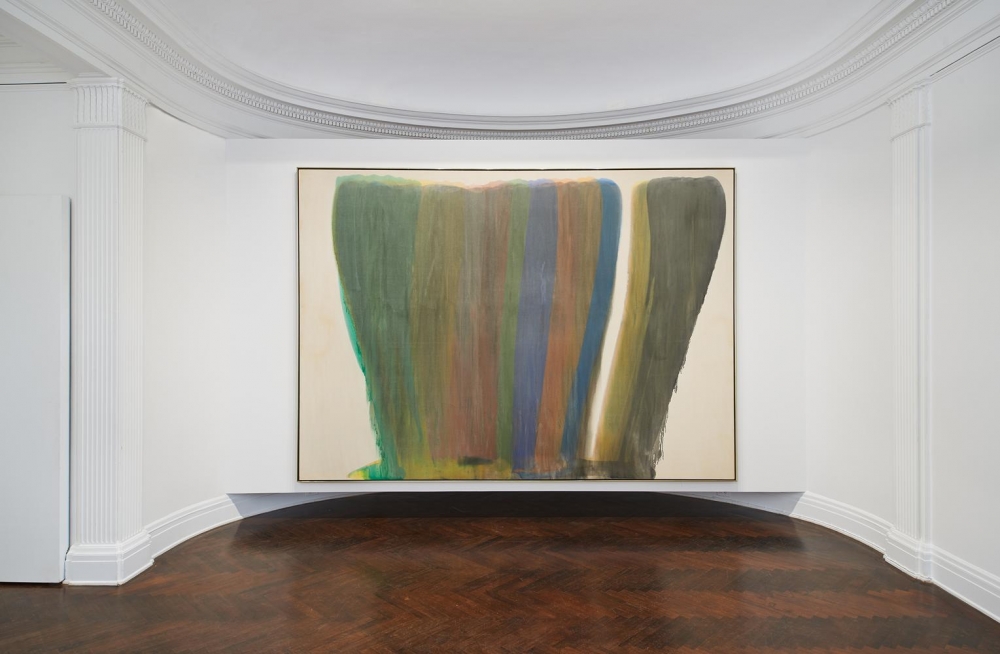 Color Field painting arrived, in the late 1950s, at a moment of simultaneous exhaustion and innovation: fatigue with the Abstract Expressionist hegemony on the one hand, and radical new developments in paint chemistry on the other.

These forces conspired in a movement to make paintbrushes superfluous and to give color, the essence of painting, even more primacy. As the critic and Color Field champion Clement Greenberg put it, “The more closely color could be identified with its ground, the freer would it be from the interference of tactile associations.”

Helen Frankenthaler and Morris Louis, egged on by Greenberg, were at the forefront of this color liberation. Working with new acrylics like Magna, which retained their bright hues even when thinned to a watery consistency, they made exceptionally vivid, viscous and immediate paintings on unprimed canvas. Their vigor can be savored in two gallery shows little more than a block apart: “Helen Frankenthaler: Composing With Color: Paintings 1962-1963,” at Gagosian, and “Morris Louis: Veils,” at Mnuchin Gallery.

The Louis works at Mnuchin date from 1958 to 1960; the Frankenthalers at Gagosian, from 1962 to 1963. But the Frankenthaler exhibition should really be seen first, in deference to the influence of her early stain paintings: specifically, “Mountains and Sea,” hailed as a precursor to Color Field painting. Louis saw this canvas in Frankenthaler’s studio in 1953, and later called it “a bridge between Pollock and what was possible.”

“Mountains and Sea” isn’t on view here, but, for some, it will still be fresh in mind as the centerpiece of a more substantial Frankenthaler exhibition, “Painted on 21st Street: Helen Frankenthaler From 1950 to 1959,” at Gagosian’s Chelsea branch last year. That show explored her transition from sweeps of a loaded brush to watercolorlike stains. (Like the earlier show, this one was organized with Frankenthaler’s estate by John Elderfield, chief curator emeritus of painting and sculpture at the Museum of Modern Art and a consultant to the Gagosian.)

“Composing With Color” is a more focused, intimate event, with just 11 paintings on view. It finds Frankenthaler again in an in-between phase (or phases), moving from oil to acrylic and from linear, landscapelike elements to free-floating, amorphous blobs. Sometimes all of this is happening in a single painting; 1963’s “Gulf Stream” includes both muscular swipes of thick oil and thin, Rothko-esque patches of acrylic.

Frankenthaler also experimented by working on both sides of a canvas, flipping it over to reveal impressions of her studio floor and areas where the paint had seeped through. These works, known as her “floorboard” paintings, could get muddy (as in “Moat,” 1963).

In “Cool Summer” and “Hommage à M. L.,” from 1962, vertical and horizontal squiggles form loose clusters, separated from one another, and from the surrounding canvas, by the greasy-looking halos (the result of diluting oil with turpentine). In acrylic works a year later — “Pink Lady” and “Mountain Pool” — much has changed; the forms are spreading to the edges of the painting, the colors are bright yet revealing of the weave of the unprimed canvas, and the contours, though slightly feathery, have no halo.

Works in Louis’s “Veils” series, at Mnuchin, were also made with Magna (an acrylic resin invented by a friend of Louis’s, the paint chemist Leonard Bocour). But the “Veils” works have a different impact; they respond to the centrifugal forces of Frankenthaler’s stain paintings with a strong, almost overpowering vertical thrust. And as the title of the series implies, they layer bright colors over one another and under silky washes of black or umber.

The result is a strange sensation of weightless accretion, as Greenberg recognized: “Louis spills his paint on unsized and unprimed cotton duck canvas, leaving the pigment almost everywhere thin enough, no matter how many different veils of it are superimposed, for the eye to sense the threadedness and wovenness of the fabric underneath. But ‘underneath’ is the wrong word. The fabric, being soaked in paint rather than merely covered by it, becomes paint in itself, color in itself, like a dyed cloth.”

In some ways, Louis’s immersive works seem to have more of an affinity with paintings by other Color Field artists like Newman and Rothko than they do with Frankenthaler’s stains; they evoke sublime, magisterial experiences of caves and grottos (as in the somber “Curtain,” with its stalactitelike points) or waterfalls (in the luscious “Tet,” on loan from the Whitney Museum of American Art).

They also call attention to their technical precociosity, as Frankenthaler’s works rarely do — pulling the veil away just enough, at the edges, to reveal the complicated arrangements of colors beneath. (As Karen Wilkin observes in her essay in the Mnuchin catalog, Louis was reluctant to discuss his working methods. Diane Upright’s essays in his catalogue raisonné, the entirety of which is online, shed some light on them.)

A more thorough accounting of Color Field painting would probably have to start with Pollock and end with Stella, with Noland, Olitski, Rothko and Newman somewhere in between, alongside Frankenthaler and Louis (and Greenberg hovering over all of them, singing the swan song of the authoritarian critic). And it would have to contrast the starry-eyed expectations for the movement — the “what was possible,” in Louis’s words — with the reality of its displacement, before the 1960s had ended, by Pop and Minimalism.

But these two shows give us something much more candid and exhilarating: not a movement, exactly, but a moment of synergy among artists, critics and chemists.

A version of this review appears in print on September 19, 2014, on page C26 of the New York edition with the headline: Color, Chemistry and Creativity.