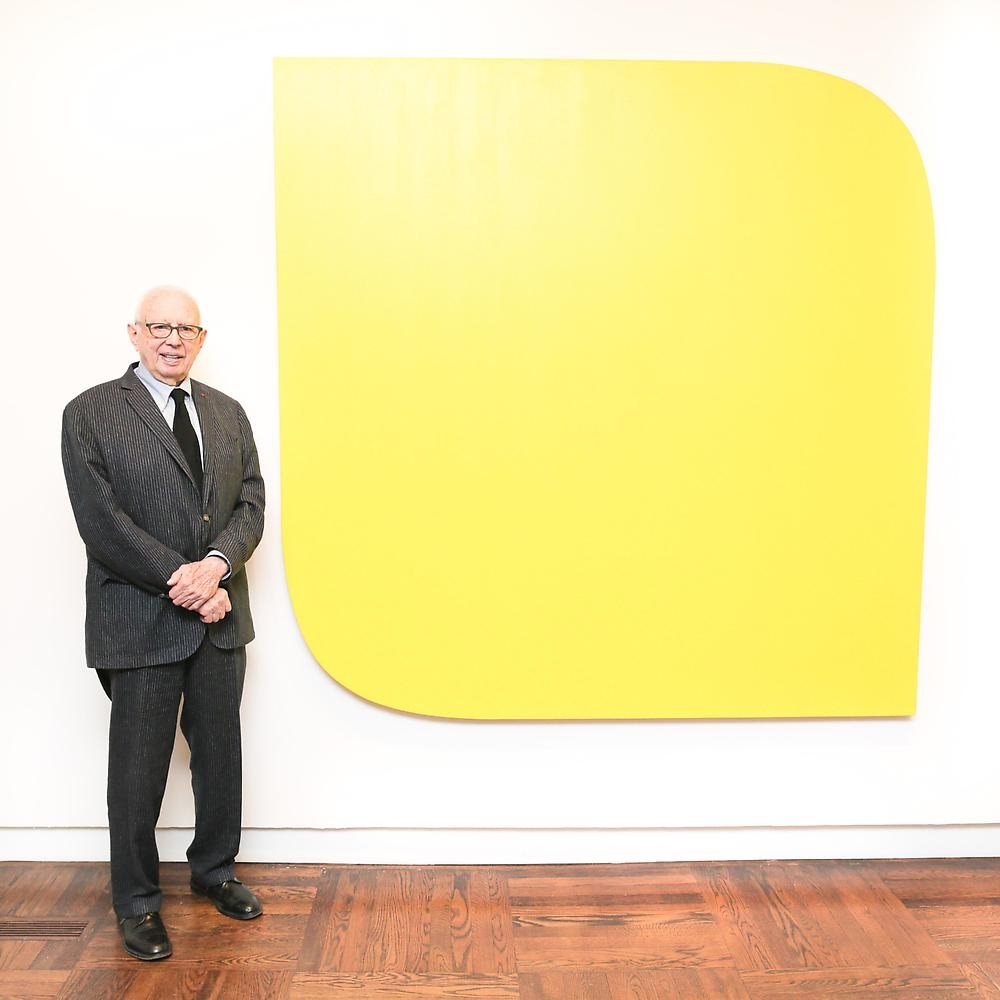 Kelly's Colors Only Get Brighter With Time

When you live to 90, you collect a lot of stories. And when you've lived the life of Ellsworth Kelly, your book can read like a who's-who in a modern-art museum collection.

"Do you know Bruce Nauman? Have you ridden horses with him?" asked Mr. Kelly, the painter and sculptor who turns 90 on May 31. He has, once. "I was with Agnes Martin when we visited. A little ski town, Taos."

Meeting for an interview at Mnuchin Gallery, on the Upper East Side, in advance of a show that opened there last month, Mr. Kelly took several welcome detours in conversation, though the task at hand was to talk about yet another show. "Chatham Series," opening May 25 at the Museum of Modern Art, features the series of joined two-panel, two-color paintings the artist made after leaving New York City for Spencertown, 125 miles up the Hudson River, in 1970. MoMA's exhibition is the first to present the full series since its debut at the Albright-Knox Art Gallery in Buffalo, in 1972.

"Chatham Series" is one of several shows scheduled during Mr. Kelly's 90th birthday year, and there is plenty of work to consider—six decades of paintings, prints and sculptures. But one can't help but encourage the artist to talk about, for instance, his brief encounter with Pablo Picasso in Paris after World War II, as Picasso's chauffeured car squeezed past him on a narrow street: "He saw me and smiled and said, 'Do we know each other?' And it was almost like, 'Come in.' And my French was so bad I said [to myself], 'If I get into that car, he'll throw me out in the next five minutes.' "

He looked wistful as he recalled that day. "If I had gotten into the car, my whole life would have been changed. You feel like every little decision you make changes your life forever."

Mr. Kelly has done just fine, even without Picasso's intervention. In a career going back nearly to his service in World War II, he has been lionized for his minimalist celebrations of form and color, his shaped canvases (the subject of the Mnuchin show, where the entire work is a single color on a canvas stretched into a particular shape, thus transforming the painting into an art object) and his sculptural and relief work. Recent and forthcoming shows and special installations also include the Tate Modern in London and the Barnes Foundation in Philadelphia. Some were prompted by the Mr. Kelly's foundation reaching out to friends, like the Tate's Nicholas Serota, at institutions that already included his work in their collections.

"Well, Jack says, 89 and 91 is not that big a thing," the artist said, referring to Jack Shear, his partner and the director of the foundation created to preserve and further his work. "'It's 90, it's important. You've got to do something.'"

But beyond exhibits with retrospective angles, Mr. Kelly is also presenting new work. His show at Matthew Marks, his longtime New York gallery, includes paintings made in the past two years. The work there—in a show called, simply, "Ellsworth Kelly at Ninety"—features large reliefs in his trademark rich hues (a deep sky-blue square with rounded corners), but also black and white.

"I think that one of the great things about Ellsworth is he established this vocabulary very early on his career by the late 1950s when he was in Paris," said Mr. Marks. "And he has stuck to it very consistently using the same forms, colors, shapes. Each series of paintings, every few years, through every decade, everything he makes, you never have to wonder is that a work by Ellsworth Kelly. And yet it somehow always looks new, always looks fresh."

Mr. Kelly still works out of a studio in Spencertown, where he has lived for more than 40 years. When he first moved there from the city, he was struck by the difference in the heights of buildings, which inspired the drawings that led to his "Chatham Series" of joined horizontal and vertical panels. "I think it must have been something with the difference in architecture, from a country town and the city—the city is so vertical," he said. "You don't really look up unless you're from out of town."

Each of the "Chatham" paintings features two joined rectangular panels of different color combinations and different heights and lengths. When joined, they make a reversed "L" shape.

"Drawing is really the engine of my work," he said. "I have these spurts in my mind and all of a sudden I feel like, 'Ah, that's the solution to something.' For a long time, I had these enough, constantly, and now as I get older I'm wearing it out, I think."

But those who know him continue to marvel at his output.

"I think one of the things that is great about being 90, he only feels his body. His sense of wonder, wanting to create more [are still there]," Mr. Shear said.

And the attention being paid to Mr. Kelly now, 90th birthday or no, has an extra poignancy. Though he had his first MoMA retrospective 40 years ago, his star has climbed more steadily in the last two decades. "Ellsworth was not a superstar," said MoMA curator Ann Temkin. "He was never unknown or unappreciated, but the stature he enjoys today is something that wasn't as widely acknowledged some years back. He's still making great paintings and sculptures and drawings. It's not just looking back but it's looking forward as well, and that's quite extraordinary."