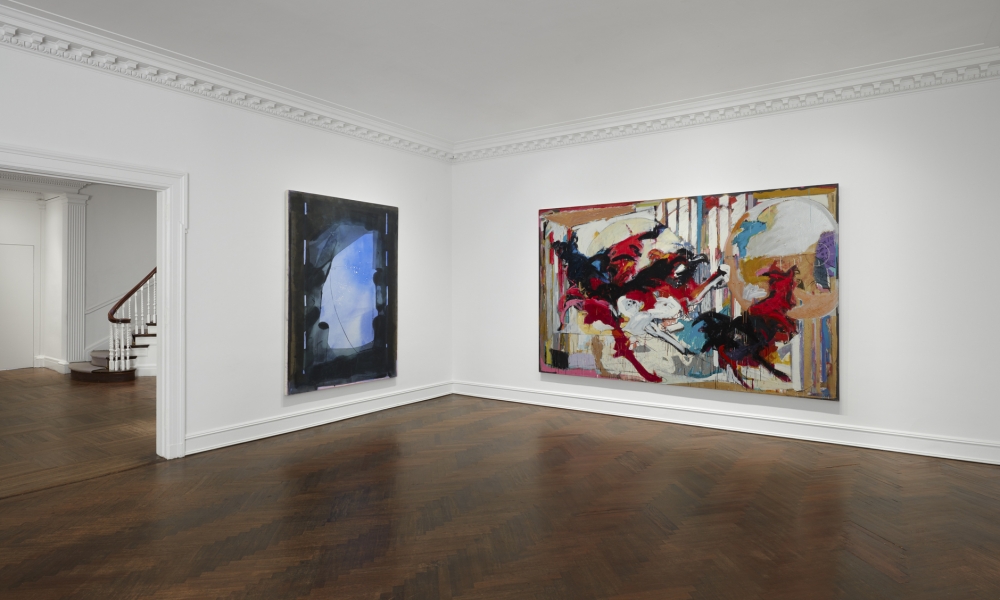 This remarkable show, of the abstract- and minimalist-inspired paintings of the established painter Mary Lovelace O’Neal, based in Oakland and Mexico, but an under-recognized and important artist in New York’s regard. It is her first show here in more than two-and-a-half decades. The artist, a daughter of a music professor, was born in Alabama but lived in a number of states. In 1964, she received her BFA from Howard University; then, in New York, she received her degree from Columbia University in 1969. Following the award of her degree, Lovelace O’Neal made her way to Oakland, where she taught at a number of schools, including Berkeley, where she became a professor in 1979. Her style, marvelously vibrant and abstract, relies on texture for expressiveness, as much as form and color.​

Finally, we are starting to recognize important black American abstract painters--artists such as Norman Lewis, Alma Thomas, and Ed Clark. These outstanding artists opened a path for artists like Lovelace O’Neal, whose youth was focused on the civil rights movement as much as art. There will have to be a new history of American painting beginning with the middle of the last century, which has emphasized too much a narrow strain of artists, from which excellent under represented painters have been excluded. Lovelace O’Neal is particularly interesting in the sense that she has made most of her painting life on the West Coast, although her work does seem informed by movements that began in New York: abstract expressionism and minimalism. Perhaps it was an advantage to work outside the epicenter of the cutting edge, but the paintings demonstrate her very sharp knowledge of what was happening on the other side of the coast. She appears to move effortlessly within styles that contrast sharply; her minimal paintings are every bit as achieved as her expressionist flings.​

What does Lovelace O’Neal’s accomplishments in two major manners of working mean? Perhaps it signifies two things: that stylistically disparate styles are in fact available to artists who want to objectively explore the attributes of more than one way of working; and that in the postmodern era, it may even be incumbent for the artist to pay impartial attention to differing approaches to making paintings--think of the gap, so brilliantly handled, between the abstraction and the photorealism of Gerhard Richter’s work. Lovelace O’Neal’s output thus argues for a freedom of the imagination, one in which the bias of the artist need not be confined to a single point of view. Such a catholicity of taste has enabled the artist to produce a body of work notable for its independence, even as it participates in the major movements of its time. Good art always needs autonomy, especially when it looks like stylistic movements have exhausted themselves in light of previous advances. That Lovelace O’Neal can so effectively communicate a radical freedom in her mind and hand, in such successful paintings, argues for the ongoing openness of the American imagination, somehow free despite our penchant for segregation--by race, by gender, by class.​

If we look at the paintings themselves, we find that they are stellar exemplars of impulses and advances made earlier that remain large enough to entertain continuing efforts in a broadly similar style. The major painting, Running with My Black Panthers and White Doves (ca 1989-90), is a wonderful gathering of imageries--inevitably with a political association, given our knowledge of the artist’s activism as well as the African-American political group active in the 1960s. In this painting, too, we experience some of the brilliant colors used in the clothing traditions of West Africa. The work itself consists of black cat-like figures in motion, encompassed by red passages, with a bit of a striped background. In the upper-right corner, we can see a rounded white form--we assume it is one of the doves mentioned in the title. If it is more than likely true that the panthers refers to militancies of the 1960s, perhaps we can also say that the doves suggest a sense of peace, nearly biblical in its motivation. The title of the show, “Chasing Down the Image,” emphasizes the activity of capture--maybe one of the best ways of looking at Lovelace O’Neal’s art, which nearly overflows the actions of its colors and forms.​

Lovelace O'Neal, from the early to middle 1990s, comprises a mix of abstract effects and apparently figurative references to the artist herself. On either side of the painting are broad expanses of pale pinks, embellished here and there with orange-colored stripes and formless passages of paint. But in the middle, it is possible to see, on the right side of the center,  a deep reddish-pink form, whose edges might reveal a profile. And across the gap on the center of the painting, we find what looks very much like a pink hand, its index finger bent over the thumb. One may be over-speculating to see the work like this, but we do have the title as evidence of likely figuration. In a way, the painting looks to contemporary art, in the sense that today we are often merging figure and abstraction in the same work of art. Lovelace O’Neal’s practice reminds us that her paintings are germane to many ways of thinking and seeing. Her breadth of commitment finds its equal in the extended travels and working periods she has taken upon herself all over the world.​

Lovelace-O'Neal’s painting practice was not only elaborately expressionistic; it was also minimal. Some of the best pieces in the show are full in keeping with a minimalist esthetic, favoring a limited presence to a florid one. In Steam Engine (ca. 1970s), a mixed-media piece on un-stretched canvas, most of the canvas is committed to two horizontal rows of three visible squares created by thin lines. On the far left, a white band of some width, with a gently curving right edge, stops the squares’ expansion to the left; a thinnish red stripe painted on the upper fourth of the canvas adds some color to the tenuous white paint applied throughout. On the right, some very thin horizontal lines drift across the work’s expanse. One has little or no sense that this is a steam engine; perhaps, in a metaphorical manner, the painting can be linked to the generation of force. Whatever the artist’s motives in her calling the painting Steam Engine, the effort is marvelously direct without becoming overly simple. The specific reference of the title may not tell us much about the meaning of the work of art, but it does attach it to something visually recognizable rather than to abstraction alone. Thus, the tension between reality and nonobjective imagery is maintained.​

The last work to be mentioned, She Is Living in the Clouds (ca. early 2000s) is one of the best in the show. A transparently black frame, painted to resemble slightly transparent scrim, creates a window through which a light-blue sky, available nearly as a thin gauze, holds sway, suffused with light. This is about as romantic a painting as we can find now or in the artist’s earlier efforts. The title is poetic, reminding us of our need to make use of the imagination as a corrective for a reality that comes nowhere near the joyous insights of the imagination. We remember here, as the artist does, that paintings are made not only to edify or politicize, but also to solace and delight.​

More than anything else, it is fair to say that Lovelace O’Neal’s career indicates the persistence of a lyrical art, over the course of decades, that delivers its point in wonderful fashion, despite the traumas of history, more than real for a black artist. Even so, while it is important that we recognize the social realities surrounding the artist’s creative life, it is just as important or more to emphasize the imaginative freedom evident in her paintings. One can argue well enough that the two cannot be separated, but the imagination looms large in this show, emerging from the historical fractures of the Sixties into a place that is the artist’s own. Lovelace O’Neal is thus to be congratulated for her length of her imagination and its autonomy, meaning that she is in service not only to the spirit of her time but also to the likenesses of what she sees in mind. Over the course of more than half a century, she has remained true to the originality of her thinking.

“My paintings and their titles speak for me. They’re not attitudes of despair; they just simply state a factual existence that continues.”