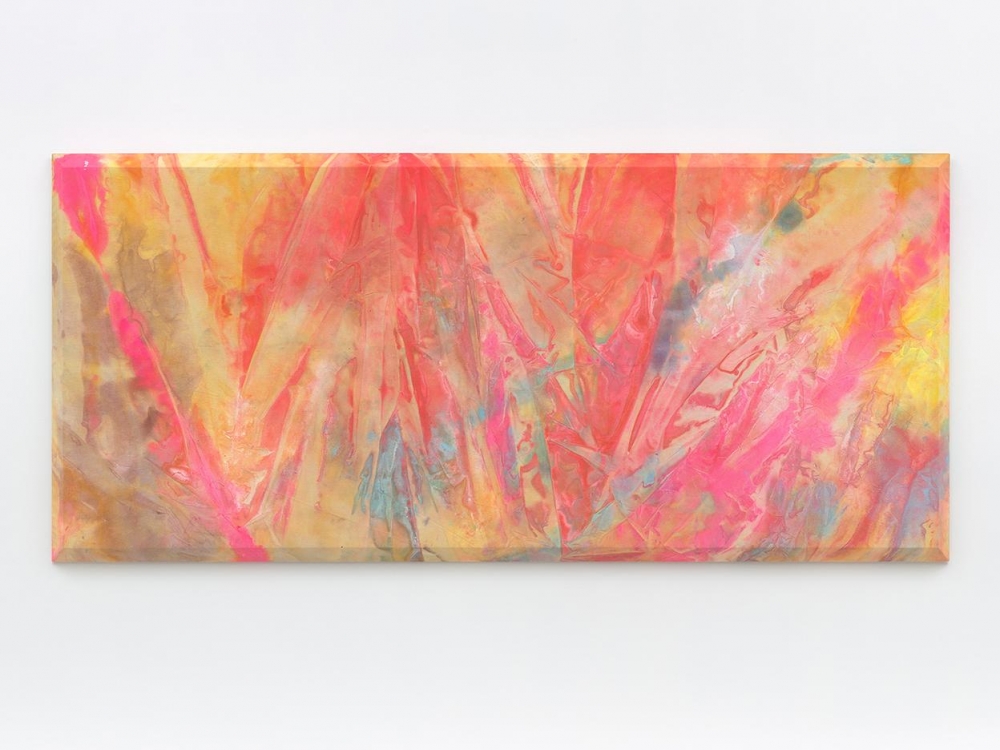 It’s a story the art world loves to tell itself: how it valiantly recovers and revives the career of a forgotten artist. In the case of painter Sam Gilliam, the story should be told thusly: It was Gilliam who recovered and revived something lost from the art world when it finally regained sight of his work. Born in Tupelo, Mississippi, on Thanksgiving Day in 1933, Gilliam moved in adulthood to Washington, D.C., and by the 1960s had made his name as part of the Washington Color School. His reputation thrived for decades, with solo exhibitions at the Museum of Modern Art, the Whitney Museum, and the Corcoran Gallery of Art, among others, as well as inclusion in the 1972 Venice Biennale.

The market’s appetite for Gilliam’s work had slowed in recent years, until artist Rashid Johnson and gallerist David Kordansky paid him a studio visit in 2012. At the time, they were already fans of the artist, but were astonished to discover a mass of early canvases they’d never known about. Here before them was a major force in American abstraction who very likely hadn’t been canonized because he, a black man, didn’t fit the art world’s expectations of what an artist of color should produce. They offered him a solo show in Los Angeles, and thereafter his career took off like a shot. At this very moment, his work is hanging in the Central Pavilion of the 57th Biennale, 45 years after he first appeared there — and a breathtaking exhibition at Mnuchin Gallery of fourteen paintings made between 1967 and 1973 presents an origin story of sorts. Curated by Sukanya Rajaratnam, the show brings together some of the earliest examples of the innovations and ideas that have now secured Gilliam’s status as a seminal American abstract painter.

At the outset of his practice, in the early to mid-1960s, Gilliam was producing minimal, non-representational paintings, vivid discourses in line, color, and geometry in a spirit similar to contemporaries Kenneth Noland, Gene Davis, Morris Louis, and others who were also dubbed part of the Washington Color School. These paintings flexed the two-dimensional to assert riotous, intelligent optical pleasures within the confines of flatness. To look at the artist’s work from those years now (not on view at Mnuchin) is a bit like watching a jazz musician mastering the scales, fine-tuning himself and his instrument, preparing to receive the transmissions of higher dimensions. (Gilliam has cited the visionary composer John Coltrane as one influence for his thinking).

In 1967, Gilliam radically shifted his approach to create his Slice series, for which he stretched canvases onto beveled-edged frames so — like a tile or a tablet or some sort of architectural element — the painting’s surface appears to push away from the wall and into the gallery space. At this time, the artist also embraced a different approach to the medium itself, setting his brush aside for a moment to first soak raw canvas in diluted acrylics, so the colors would run and bleed. From there, he would improvise a sequence of actions, gestures — folding, hanging, shaking — to compose the rest. Lighter colors were applied first; darker, after. Depth was achieved by layering the paint, building the surface; whether the pigments sink in, or are daubed on top, the colors blend, overlapping to create still more tones and textures. In a bit of reverse engineering, when all was dry, the canvas would finally be stretched around its frame. The combination of applied alchemy and freehanded choreography in Gilliam’s Slice works lands them in a rich, affecting territory bordering the states, the conditions, of painting, sculpture, and textile.

Thrust and With Blue, both on view, are two of the radiant results from that year, each in possession of their very own mood. At eight and a half feet tall, With Blue is the most melancholy work of the exhibition, its dark blue–to-gray palette lifted, made luminous, by the aluminum powder Gilliam applied throughout. Shimmering lines from where the artist creased the canvas run from top to bottom of the painting, and something about its verticality along with its silvery aura gives it a contemplative quality. Thrust, in counterpoint, is a more fiery and gregarious work, with wilder whirls of color — from lilac to ruby red, tangerine to khaki green — marbling across the surface, which appears purer (as in more painterly), unbounded by line or composition, but propelled instead by rhythm, roil.

It would seem paradoxical for a painter that chance or improvisation would allow for mastery, and yet they push an artist to attend to other facets of craft — or at least attend to their other angles. Throughout the exhibition, one sees how Gilliam’s hand commands a canvas. The life force within the spontaneity of his approach never dims, but it is harnessed. Time is the secondary subject of the artist’s work — captured in paint that was pushed this way or pulled that way, dripped here and plopped there, never to be repeated; color becomes its marker. Temple Fire (1970) is nine feet of Day-Glo pink, periwinkle blue, livid yellow, foggy gray, and more and more all running together, fanning over each other so the colors never settle, are ever vibrating, emitting, or soaking up the light depending on their proximity to one another.

It was apparently an accident that led Gilliam to his most beloved and influential Drape works in 1968. Simply told, one of his unstretched canvases fell to the ground one day, sparking the idea to create and install paintings without a frame — paintings that would instead be draped, tied, folded, and hung in space, and thereby placed in more intimate conversation with sculpture. Bow Form Construction of that year is ten feet of canvas tied at either end and suspended from the ceiling as oversize fabric swag. With bulky grace and terrific drama, it shape-shifts before the eye, its massive folds seeming to take on the weight and appearance of ceramic, or carved marble. Little Dude (1971) and Idle Twist (1972) are hung like punctured blossoms — rather, small, stilled explosions — loosely bunched in the middle, their corners tacked up on the wall, spreading outward.

The exhibition’s grandest piece is Carousel Change from 1970, for which seventy-six feet of canvas is gathered and tied at the top in five places. Monumental in scale, its overall palette is light, joyous, splashed, soaked, and slapped in hot pinks, peaches, yolky yellows, dark sky blues. It is, as the title suggests, dizzying. The eye has nowhere to land, no choice but to keep moving over its lush, popping terrain. At the risk of overreading, there is something prophetic about it too — how the painting speaks to the ways in which attention (of an audience, of the art world, and otherwise) like a carousel ride is cyclical, moving “forward” only to come back around as it must, as it will, and as it rightly should.

Village Voice
Back To Top