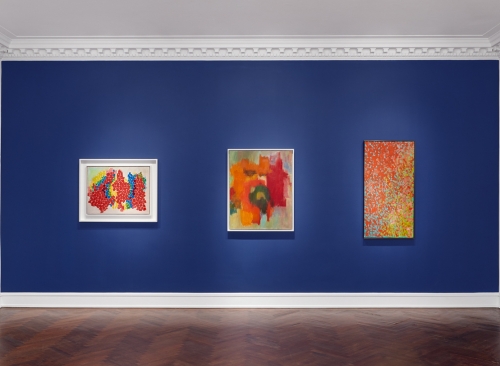 In 2015, the White House acquired a painting by Alma Thomas entitled Resurrection (1966). The painting, which features concentric circles of bright colours in Thomas’ signature fashion, will soon share its name with an exhibition at the blue-chip Mnuchin Gallery in New York. In just a week, the gallery will open Alma Thomas: Resurrection, which stands to be one of the largest solo exhibitions of works by the Thomas.

In a statement to ARTnews, Sukanya Rajaratnam, partner at Mnuchin and curator of the show, said: ‘[Thomas is] a very significant artist and I don’t know if she’s been celebrated as much as she should be, and that’s part of why we’re doing this. A lot of people are still unsure about who Alma Thomas is or was, including a lot of our clients, and our platform offers a kind of reach that only few galleries have.’

So, ‘Resurrection’ will work to remedy exactly that, giving visitors a chance to become well acquainted with 35 of Thomas’ works on paper and paintings. The artworks are on loan to the gallery from institutions, including the Hirshhorn Museum and Sculpture Garden, Howard University, and George Washington University, and private collections. The exhibition will begin on September 10th just a couple days after what was dubbed Alma Thomas Day on September 8th by then-Washington DC mayor Walter Washington in 1972.

In the same year that she received a day honouring her life and career, Thomas, who was born in Georgia in 1891 and moved to Washington DC with her family in 1907, became the first black woman to hold a solo exhibition at the Whitney Museum of American Art. Following that show, the Whitney acquired Mars Dust, a 1972 painting by Thomas. Before that, though, Thomas received her degree from Howard University in 1924. She was the first person to graduate from the school’s Fine Arts programme, which would be one of many firsts that she accomplished, and she was one of the first African American women to receive an arts degree in the US. After that, she began teaching art at the city’s schools and did so for 35 years. When she retired at age 68, she turned her focus completely to painting. Thomas died at age 86 in 1978, but before she did, she’d exhibited works in a number of galleries, including the Howard University’s Franz Bader Gallery, DC’s Corcoran Gallery of Art, and New York’s Martha Jackson Gallery. In 1998, Thomas was the focus of a retrospective that travelled to multiple museums, including the Smithsonian. In addition to ‘Resurrection,’ Thomas will be the centre of another retrospective at the Chrysler Museum of Norfolk in Virginia set to open in 2021 that will also travel to the Columbus Museum in Georgia the following year.

When asked why now and why Thomas, Rajaratnam said: ‘What piqued my interest in reading her life story and seeing her paintings was how powerfully her work spoke to the political dynamics of today. The timing felt more and more urgent to the present situation that we inhabit.’

‘Alma Thomas: Resurrection’ will be on view at the Mnuchin Gallery in New York from September 10th through October 19th.

Art Critique
Back To Top